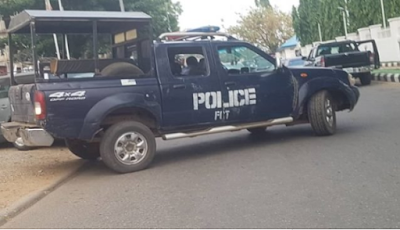 Oluwatoyin Ajogbor, a Nigerian citizen, has accused police officers at Agbowa-Ikosi divisional headquarters in Epe local government area of Lagos state of extorting money from her and others.

In a video that has now gone viral, Ajogbor claimed that her vehicle and that of others were impounded and the officers were asking them to pay N10,000 each.

Although there is movement restriction in the state, she  explained that most of them had gone to get food items within their locality.

According to her, they were all taken to the police station and were extorted to the tune of about N500,000.

“The incident happened in Agbowa on Tuesday morning when I went out with a friend to buy food items because there was nothing in the house to eat again,” she narrated.

“I went round the town looking for a POS operator but couldn’t find any and there is no bank in Agbowa to use their ATM.

“We met some policemen at a checkpoint, they stopped and asked us where we were heading to. I explained to them that I was looking for a POS operator so that I could withdraw some money to buy food items.

“They thereafter described where we could find a POS operator around the place.

“I thanked the policemen and went to the POS operator. He only had N10,000 available, so I collected everything even though I wanted more.

“Suddenly to my surprise, one of the policemen jumped into my car and asked me to drive to their station.

“I explained to them why I was out and moreover the government said we could go out to get food between 10:00am and 2:00pm.

“So, they took us to Agbowa Police Station and we were detained until 8:00pm because the DTO, one Adebayo Ojo, wasn’t around.

“When Ojo came, he told us he doesn’t want to talk to anyone, that we should get out and go and see one Sergeant Adeleke, a woman. It was this female sergeant that collected the N10,000 from us.

“Immediately we got to her, she told us that the DTO sent her to us and that our fine was N10,000 each.

“Funny enough, it was this same DTO, Adebayo Ojo, Sergeant Adeleke and others that led me to the POS guy from whom I collected cash before being arrested.

“The police officers at that station collected all the money and made me go back home empty-handed without food to survive this lockdown.”

Reacting in a statement on Thursday, Bala Elkana, Lagos police spokesperson, said the officers have been identified and arrested.

“Attention of Lagos State Police Command is drawn to a video on social media in which a Lady alleged that her vehicle was impounded by the Divisional Traffic Officer (DTO) Agbowa Division and a female sergeant,” the statement read.

“She equally accused the officers of extorting money from her. After analysing the video, the officers mentioned were identified by our operatives and arrested. They are Assistant Superintendent of Police (ASP) Adebayo Ojo and Sergeant Adeleke Mojisola.”

He said Hakeem Odumosu, Lagos commissioner of police, has ordered an in-depth investigation into the case.

He added that the commissioner has reaffirmed his stance against corrupt practices and impunity, and members of the public will be updated on the outcome of the investigation.

Below is the video