Police yet to release our wounded, dead members ― Shi’ites 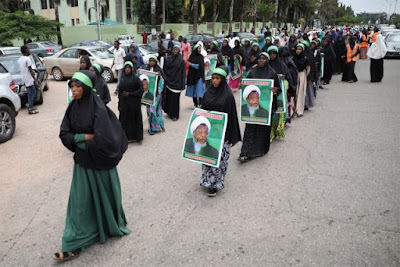 Members of Islamic Movement of Nigeria (IMN), a.k.a Shi’ites, on Sunday alleged that the Nigerian Police were yet to release bodies of their members shot dead, and those who sustained injuries during a clash with security agents 10 months ago.

Recall that on July 22, 2019, the Shi’ites in Abuja had staged a protest; demanding the release of their leader, Sheikh Ibraheem El-Zakzaky, who was held in a detention facility by the federal government in defiance to several court order for his release.

The protest became fatal and claimed the lives of a police officer, six members of IMN, a journalist with Channels TV.

However, in a statement issued by Abdullahi Musa, the Secretary of IMN’s Academic Forum of the IMN, claimed the police evacuated the corpses of their members and has refused to release them for befitting burial.


“The police evacuated all the corpses and deposited them at the National Hospital. Some of the seriously injured protesters were however taken to the University of Abuja Teaching Hospital, Gwagwalada by members of their immediate families.

“Unfortunately, a legion of armed-to-the-teeth policemen raided the hospital and whisked them off. Having arrested and taken those already admitted away from the hospital, despite their gory gunshot wounds, the police dumped them at the FCT-SARS without treatments, medical or surgical.

“Under police custody, three persons died due to lack of medication coupled with traumas of the facility, and their corpses were deposited at the Asokoro District Hospital.

“Since then, all concerted efforts to have all the nine corpses released for befitting burial proved abortive. There has never been any positive response from neither the police nor the National Hospital nor the Asokoro District Hospital.

“In November 2019, the protesters that survived five [5] months of humiliating torture and life-threatening detention, were arraigned by the police before Justice Sulaiman Bolaji Belgore of the FCT High Court.

“After the arraignment, the Judge ordered that the accused persons be remanded at a Correctional Centre. Owing to gunshot wounds, orthopaedic ailments as well as several other deadly injuries sustained by the accused, the officials of the Nigerian Correctional Service [NCS] at Kuje refused to accept some of them,” he said.

He further said the refusal by the officials of the National Correctional Service to accept the injured protesters gave the police another room to detain their members: Imran Ayuba, Muhammad Khamisu and Muhammad Muhammad in an undisclosed detention facility.

“Throughout these ten months, the police have denied, and still deny, the relatives of the accused sort of access to them, nor do they give them the medical attention much required by their conditions.

“Under such seriously damaged health conditions, the trial of the protesters continued and the Judge along with the prosecuting counsel, DSP Simon Lough, have been playing hide-and-seek and yet manoeuvred to needlessly refuse the accused persons, bail. Over seven sittings, the court continued the trial and refused to look into the bail application filed by the accused through their counsel.

“The Judge and the prosecutor were well aware that only hale and hearty people could be tried, yet the trial was continued without regard to the accused medical challenge. Isn’t the court’s refusal to hear the bail application an obvious denial of their fundamental rights?

“Protest is not a crime, nor is protesting; it is as enshrined in the constitution as the right to life. Thus, we are demanding for the release of all Free-Zakzaky protesters amidst the COVID-19 emergency, which necessitates prison de-congestion across the country.

“The carefree attitude shown by the police with respect to their July-2019 brutality is inhuman and unprofessional.”