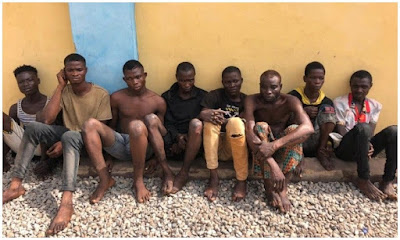 The Ogun State Police Command on Saturday arrested some suspects in connection with the unrest foisted on residents in parts of the state.

This was contained in a statement signed by AIG Sola Subair (rtd.), the Special Adviser on Security to Ogun State Governor, Dapo Abiodun.

This happened as the 14-day lockdown order of the President Muhammadu Buhari to curb the spread of COVID-19 in the two states enters day 12.


Lagos State Police Public Relations Officer, Bala Elkana, had said Lagos was working with its counterpart in Ogun to effect the arrest of suspected persons.

“The government has not only moved swiftly into action, the affected towns including but not limited to Sango, Ijoko, Ifo, among others are currently under substantial security surveillance.

“The Governor, Prince Dapo Abiodun, has communicated with all relevant agencies and mandated them, especially the State Police Command, to ensure law and order in all the affected areas.

“The government had earlier seen to the arrest of some suspects, as carried out by the Police, is in connection with the chain of unrest in the affected localities.

“Initial arrests notwithstanding, the State Police Command is not leaving any stone unturned as the command has arrested more suspects, and an investigation is currently ongoing as suspects in custody continue to provide helpful information.”