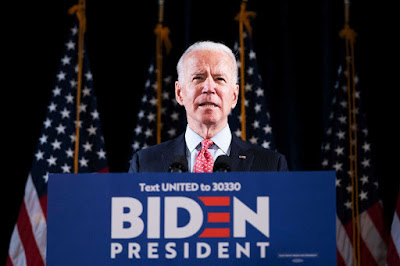 Ex-President Barack Obama on Tuesday offered his formal endorsement of former Vice President Joe Biden, injecting himself squarely in the presidential race for the first time.

He urged Democrats across the party’s ideological spectrum to rally behind Biden and form a unified front to defeat President Donald Trump and win back the White House.

Obama, in a lengthy videotaped on Monday and posted yesterday, hailed Biden’s character and resilience, touting him as the right kind of candidate to lead the country through a crisis like the ongoing coronavirus pandemic.

He also highlighted the stakes of the 2020 election by arguing Trump and Republicans in the Senate are solely interested in power, not making progress for Americans.

“If there’s one thing we’ve learned as a country from moments of great crisis, it’s that the spirit of looking out for one another can’t be restricted to our homes, or our workplaces, or our neighbourhoods, or our houses of worship,” Obama said in the over 11-minute endorsement video. “It also has to be reflected in our national government.”

“And that’s why I’m so proud to endorse Joe Biden for President of the United States,” he added.

The endorsement of Biden marked the public re-emergence of Obama into the political arena.

The former president kept a low public profile throughout much of the Democratic nomination fight, but he was active behind the scenes.

Biden thanked Obama for the endorsement yestersday shortly after the video was posted.

“Barack — this endorsement means the world to Jill and me,” he wrote. “We’re going to build on the progress we made together, and there’s no one I’d rather have standing by my side.”

Obama also spoke directly to progressives, praising the spirit of their movement before outlining why he believed they should embrace Biden’s candidacy. The former president also offered full-throated praise of Bernie Sanders and noted what his candidacy has meant for the pursuit of liberal ideals.

“Bernie’s an American original – a man who has devoted his life to giving voice to working people’s hopes, dreams and frustrations. He and I haven’t always agreed on everything, but we’ve always shared a conviction that we have to make America a fairer, more just, more equitable society,” Obama said.

The former president also offered some of his most direct criticism yet of his successor without calling Trump out by name.

“One thing everybody has learned by now is that the Republicans occupying the White House and running the U.S. Senate are not interested in progress,” Obama says. “They’re interested in power.”