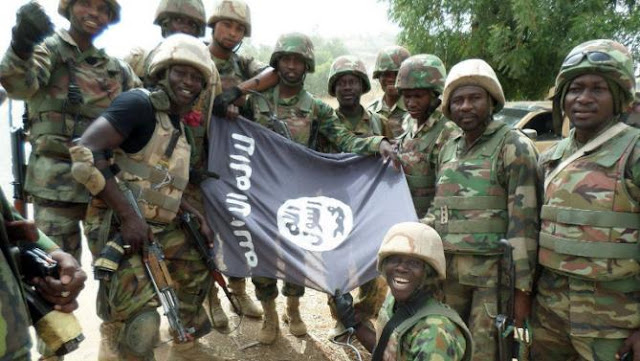 Troops of Operation Lafiya Dole (OPLD) have sustained their offensive against Boko Haram terrorists that are hibernating in different locations within the North East theatre of operation.

The sustained offensive by the troops is yielding fruitful results as they have succeeded in dislodging and killing several of the insurgents.

The Coordinator, Defence Media Operations, Maj.-Gen. John Enenche, disclosed this in a statement on Wednesday.


Enenche said the troops of Sector 1 of OPLD had in the last seven days engaged the terrorists on many fronts.

He disclosed that the troops of 121 Task Force Battalion under 26 Task Force Brigade while in ambush position, killed terrorists on April 22 at Pulka crossing and recovered one loaded AK47 rifle.

According to him, troops recovered a motorcycle painted in military colour and one locally fabricated hand grenade.

Enenche also disclosed that troops of 192 Battalion of 26 Brigade deployed to Gwoza on April 24, killed two terrorists who were attempting to cross through the Mandara mountains to Sambisa forest.

He added that several other terrorists escaped with gunshot wounds while a bicycle and two copies of the Holy Qur’an with assorted clothing were recovered.

According to Enenche, troops of Echo Company 114 Battalion also neutralised two terrorists at Yenegu village in an attack on April 27 while others fled due to superior fire power of the troops.

“Unfortunately in the process, one soldier paid the supreme sacrifice while another sustained gunshot wound.

“However, three Boko Haram terrorists were neutralised, while one motorcycle was captured. Others are suspected to have fled with life-threatening injuries.

“Also on April 24, troops of 151 battalion conducted ambush operations along Firgi general area and made contact with terrorists and recovered one AK 47 rifle, two motorcycles, and two bicyles,” he said.

The coordinator further said that the troops of 152 Battalion in another ambush operation on April 26, made contact with the terrorists’ food supply party near their crossing point at Miyanti.

He said that a soldier sustained a minor injury while three terrorists were killed.

According to him, four carts conveying several food items and clothing were destroyed at the location.

Enenche also said that troops on clearance operations to Bula Shatane village, 15 Kilometres from Bama engaged the terrorists who fled on sighting the troops advancing towards their location with heavy gun fire.

According to him, the village was successfully cleared while all makeshift houses were destroyed.

“Due to the ongoing offensive, two Boko Haram terrorists came out from Bula Bello and Yerimari Gana and surrendered to troops of the 21 Special Armoured Brigade Garrison deployed to Bama on April 23.

“The two terrorists, who surrendered were handed over to 21SAB Military Intelligence Regiment.

“During preliminary investigations, they revealed that the sustained military operations by land and air made them to surrender.

“The IDPs were searched, screened, and accommodated at a holding facility pending the conclusion of preliminary investigations.

“However, the IDPs were fed while the minors were administered with polio vaccines.

“In summary about 11 Boko Haram terrorists were neutralised while many escaped with injuries, just as equipment and supplies were captured and destroyed.

“The Armed Forces of Nigeria remain resolute and highly committed to ending the Boko Haram insurgency.

“The general public is requested to continue to provide timely and credible information for the enhancement of our operations,” he said.