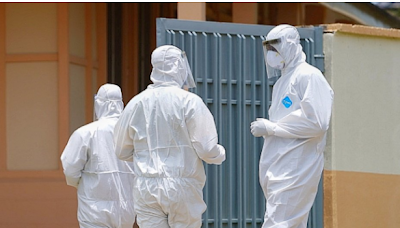 This, they said, would further motivate their members on the front line of tackling the raging disease, given the hazards they are exposed to on duty.

In Nigeria, as of Saturday, a doctor had died as a result of the disease, two doctors in Edo State had also tested positive for the virus, while about 25 doctors, comprising house officers, resident doctors and a consultant had been in self-isolation after coming in contact with COVID-19 patients.

Similarly, in Lagos, the Chief Medical Director, Lagos State University Teaching Hospital, Prof Adetokunbo Fabamwo, told News Agency of Nigeria on Saturday that four nurses in the hospital had been placed in isolation after they had contact with a patient who died of the virus. He, however, said all the doctors took precaution when attending to the patient.

He added, “When the woman (patient) was about to die, and was gasping for breath, the nurses rushed to her and tried to do pulmonary resuscitation on her.

“They moved more closely to her. Though they were protected, we felt that because of that closeness, we should isolate them so that they won’t go home and be a risk to their families.”

Also, the number of confirmed cases in the country rose to 318, following 13 new cases detected on Saturday.

The Nigeria Centre for Disease Control via its Twitter handle, @NCDCgov, tweeted, “13 new cases of COVID-19 have been reported; 11 in Lagos, one in Delta and one in Kano.

Meanwhile, the heads of the three medical associations, who spoke on behalf of their members, told newsmen on Friday that even though the Federal Government had consistently muted the idea of life insurance for health workers, the implementation was belated. They noted however that there was no better time to put the policy in place than now.

The Minister of Finance, Budget and National Planning, Mrs Zainab Ahmed, said in Abuja on Thursday that government “would be engaging with the insurance industry to package special health care insurance, which is life insurance, for health workers.”

She added, “The Federal Government recognises the patriotism and sacrifice of our front line health care workers, whose critical roles in combating the COVID-19 pandemic place their health and lives at risk.”

Prior to this, the Secretary to the Government of the Federation and Chairman of the Presidential Task Force on COVID-19, Mr Boss Mustapha, said on April 3 that government was making efforts to provide medical and life insurance cover for the health workers battling the virus.

He had said, “In recognition of the danger to which our front line health workers are exposed, the government is working with other stakeholders to structure medical and life insurance cover for their protection. I, therefore, wish to assure them of our commitment and urge them to put in their utmost best as they battle to save us from this ravaging disease.”

The Director-General, NCDC, Dr Chikwe Ihekweazu, said at the briefing, “We acknowledge the roles the health workers are playing particularly during this pandemic. No one is more at risk than those who have the closest contact with our patients and those really are the health care workers, particularly our nurses.

“Health care workers are our absolute priority, if we lose their confidence, we will lose the response. So, whatever we are doing, we focus on making sure that our health care workers feel comfortably supported.”

Even though health is not the exclusive responsibility of the Federal Government – states and local governments also have responsibilities at different levels in terms of infrastructure and welfare of personnel – the NCDC, a federal agency, has been coordinating the response to the virus.

While the Federal Government had made promises, states have largely kept mute on the issue of life insurance for the health workers.

Speaking on this, the President of the NMA, Dr Francis Faduyile, stated that life insurance for workers was belated. He added that the country needed motivated workers who knew that their dependants would be catered for if anything happened to them in the course of discharging their duties.

He said, “I don’t think it’s now that they should be talking about this. I think it’s belated. If we have been facing COVID-19 for seven weeks and you are talking of insurance now, that is gross injustice and it shows the nonchalant attitude that the government has.

“It also shows their disdain for health workers. I heard the chairman of the Presidential Task Force on COVID-19 and SGF saying he was surprised with the state of our health sector, when we have been talking about the rot over the years. It is really unfortunate. How then would they know that it is urgent to have better insurance for health workers?”

Meanwhile, despite the promises by the Federal Government on account of the raging virus, the associations said apart from the fact that the life insurance was overdue for their members, the government was also bound by law to have instituted the insurance for them.

They cited the Pension Reform Act 2014 as mandating employers of labour to put in place life insurance for all workers to the tune of three times their annual emoluments.

Section 8(1) of the Act, which was signed into law by former President Goodluck Jonathan, reads, “Where an employee dies, his entitlements under the life insurance policy maintained under Section 4(5) of this Act shall be paid by an underwriter to the named beneficiary in line with Section 57 of the Insurance Act.”

The Section 4(5) that was referenced, however, reads, “In addition to the rates specified in subsection 1 of this section, every employer shall maintain a Group Life Insurance Policy in favour of each employee for a minimum of three times the annual total emolument of the employee and premium shall be paid not later than the date of commencement of the cover.”

Faduyile added, “It is an Act that has become law and so they (government) don’t need anybody to tell them it should be activated. Besides, we are in a war situation and it is unfortunate that the Federal Government had not quickly come up with a comprehensive insurance for our health workers. We have a lot of ineptitude and I hope we would be able to get out of it.

“We need motivated workers who know that nothing bad would happen if something happens to them in the course of discharging their duties. That is very important. It (life insurance) is one of those things that would spur people to give their best.”

Also, the President of NARD, Dr Aliyu Sokomba, said the government should not wait for the health workers to shut down the system before realising the urgency of having life insurance in place for health workers.

“That provision (Pension Reform Act 2014) was made by the government itself and we didn’t even advocate for it. The law maintained that life insurance should be procured for all workers, not just health workers, but that has not seen the light of day. Therefore, if the government really wants to do it, that was something we had proposed in the past and that is a good place to start.”

He said, “It’s better late than never and if not that the government is insensitive, this could not have been the best time. I’m aware that the NANNM has made several requests to the government to institute life insurance for its members, thus we would say it’s much desired that we commence it without further delay.

“We shouldn’t need to call for this before it is done because this is not something that should be treated with levity. I think it’s even belated to start now because we have started having a negative impact of that on the people that are working and the impact is beyond death; the motivation, morale and interest you need to face this situation akin to war is lacking.

“We have to praise the efforts of health professionals in this country because the situation is so appalling. In Ghana, their president has rolled out incentives, including tax exemption for their health workers. It will be better for the Nigerian government to do something fast.”

Speaking on the provisions of the Act, Adeniji said, “One problem with the Nigerian government is that there is no continuity. That Act was signed into law by the then President and successive governments are bound by it unless they review it.

“Another problem is that people in leadership positions are so overwhelmed by personal interests such that once their emoluments and benefits are taken care of, they don’t care what happens to the people. We have the laws but people are not willing to implement them. The President and other political office holders swore to uphold the constitution and the laws of this country but are they abiding with the tenets of the oath they have taken?”