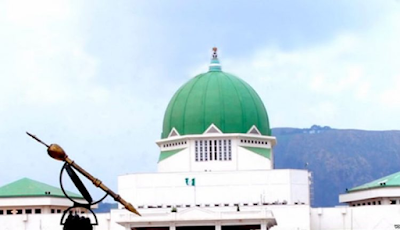 The National Assembly is mulling reconvening on Tuesday to consider and possibly approve pending interventions by the Federal Government in response to the COVID-19 pandemic.

It was learnt on Wednesday that the leadership of the National Assembly was planning to recall members from recess to attend to national issues.

A member of the House, who spoke to one of our correspondents on Wednesday on condition of anonymity, said the federal parliament might resume on Tuesday to consider the issues.

The member of the House Committee on Media and Public Affairs said, “The National Assembly is likely to reconvene on Tuesday next week and I am sure that the Emergency Economic Stimulus Bill will be one of the issues that will be addressed. The Senate will have to consider the bill too for their concurrence, as well as other issues. The Federal Government said it would bring a N500bn request and a revised (2020) budget.”


The lawmakers had embarked on break on March 24, 2020, over the spread of coronavirus disease.

The House had, however, expressed its plan to reconvene for a possible amendment to the 2020 Appropriation Act, as the Federal Government planned to reduce the national budget due to crashing crude oil prices.

The Federal Government had revised downward the revenue projection for the 2020 budget by N3.3tn; from the initial approved amount of N8.41tn to N5.08tn.

The Federal Government also revised downwards the oil price benchmark from $57 per barrel to $30 per barrel.

The exchange rate was, however, raised from N305 to a US dollar to N360 based on the devaluation of the naira by the Central Bank of Nigeria.

Among other adjustments, there is a 20 per cent cut on capital projects across ministries, departments and agencies to the tune of N312,820,542,675.

Also awaiting legislative approval is a request by the Federal Government, through the Ministry of Finance, to approve a proposed N500bn COVID-19 Crisis Intervention Fund.

Another is the Emergency Economic Stimulus Bill 2020 which the House introduced and passed in a record time on March 24 but which has been awaiting concurrence by the Senate before its transmission to the President for assent.

It was titled, “A Bill for an Act to Provide for Relief on Corporate Tax Liability, Suspension of Import Duty on Selected Goods and Deferral of Residential Mortgage Obligations to the Federal Mortgage Bank of Nigeria for Fixed Term to Protect Jobs and Alleviate the Financial Burden on Citizens in Response to the Economic Downturn Occasioned by the Outbreak of COVID-19 Disease.’

The bill, which was jointly sponsored by the leadership of the House passed the first, second and third readings same day.

It sought to provide a short-term relief to companies and individuals from the economic consequences of the COVID-19 pandemic.

The Senate’s spokesman, Godiya Akwashiki, did not pick his calls and a text message sent to his line had yet to be replied to as of press time.

Also, the House of Representatives’ spokesman, Benjamin Kalu, could not be reached for comment.