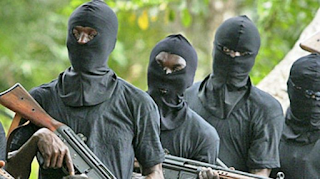 Olori Funbi Ojo, the wife of Oba Olusanjo Ojo, the Baba-Aso of Igboole in Igboora area of Oyo State, was on Monday evening kidnapped alongside her daughter by unknown gunmen.

According to reports, the monarch is the Matron of Oyo State College of Agriculture and Technology (OYSCATECH) health centre.

Eyewitness account said that the duo were kidnapped by the gunmen around Keji Abra farm, Igbole area of Igboora, around 8:15 p.m on Monday night.

It was gathered that the monarch’s wife and daughter, a trained nurse and also a serving corps member, were kidnapped while returning from the college where she worked.


However, her son who drove the bullet-ridden vehicle was lucky as he escaped being captured by the suspected kidnappers.

Another source who confirmed the incident said the victims were abducted close to the palace.

“There is a case of kidnapping in Igboora yesterday around 8:15 p.m. which involved the wife of the Baba Aso of Igbole.

The Olori also doubles as the matron of OYSCATECH health centre,” the source added. Meanwhile, the family is yet to be contacted by the kidnappers as vigilante groups within and around the town have started combing the bush to rescue the victims.

Mr. Olugbenga Fadeyi, Police Public Relations Officer (PPRO) in the state, confirmed the incident, saying that efforts have been intensified by police operatives to rescue the victim from their abductors.