Massive panic in Ikeja, Ogba over the impending attack by the notorious 'Awawa boys' 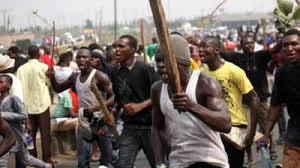 There was panic in Ogba, Ojodu and Agindigbi areas of Lagos State on Monday evening over the presence of suspected members of the dangerous gangs, Awawa Boys and One Million Boys.

It was learnt that some residents, who had lived in Agege – the base of the hoodlums, identified the boys and raised an alarm.

It can be recalled that pandemonium engulfed the Agege area in Lagos on Sunday evening after suspected members of the Awawa Boys and One Million Boys dispossessed many residents of their valuables.

When the news broke that the hoodlums have arrived in Ogba and Ojodu, residents trooped out in their hundreds carrying cutlasses, iron metals, and broken bottles in an attempt to defend themselves.

Some elderly men were also seen dressed in red and black carrying juju in their hands.

At the Oke-Ira axis, some youths climbed the roofs of houses with weapons such as stones and catapult in anticipation of the hoodlums’ attack.

It was gathered that some residents of Ogba and Akiode areas kept vigil on Sunday in a bid to defend their territories against the siege of the hoodlums.

One of the youths, identified simply as Saka, said, “We are gallant. We are ready for them. We are all suffering and feeling the pains from the lockdown.

“We had to keep vigil at Aguda yesterday when we heard gunshots. We have the information that some of them are around surveying the area.”

Another resident, popularly known as Baba Kayode, said, “We heard they went to Akiode yesterday and the boys refused to let them in, they shut the gate at them. We will not also allow them here. We call on police and other security officials to come to our rescue.

“What we heard is that police have overpowered them in Agege and they are planning to move to Ogba, being the closest area to them. Akiode is also close to Ogun State for the One Million Boys We have asked all our boys and vigilantes to be ready for war.”

The Lagos State Police Command tweeted that its officers had visited the areas to restore calm.

It said, “Police officers visited Omole and Ogba this evening to calm the nerves of the residents in the area.

“They were urged to lay down their arms, maintain social distancing and return to their homes as the police will be on the ground to provide adequate security.”