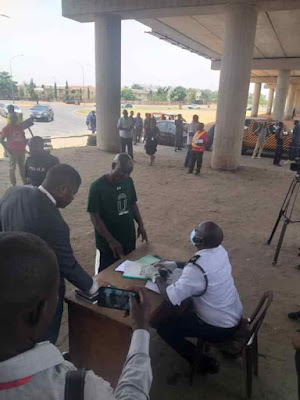 A Mobile Court sitting at the Eagle Square in Abuja, the nation’s capital, has convicted five clerics, among them are three Imams and two Pastors for violating the presidential order shutting down the Federal Capital Territory FCT.

They were convicted by Presiding Magistrate Idayat Akonni who sentenced them to one-month imprisonment. Magistrate Akonni, however, gave them an option of a fine of N5, 000 in addition to supervised community service for one day.


Addressing journalists after the court verdict, the Chairman FCT Ministerial Enforcement Task team on Covid-19 operations, Ikharo Attah said the various mobile courts which sat at different locations within the territory, convicted over 73 violators on Sunday.

Speaking on the judgment, he said; “the verdict, though mild, is a welcome development. Those sentenced should be worried because they are now ex-convicts having been found guilty and sentenced by a competent court of law.”

Attah wondered “why it has become very difficult for custodians and enforcers of divine laws to obey national laws that do not prohibit or infringe on their freedom of religion”.