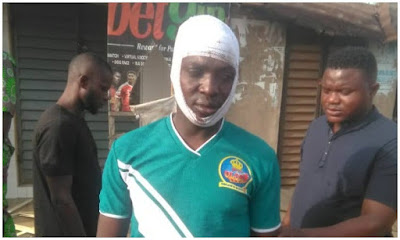 Residents of Egbe Idimu Local Council Development Area in Lagos State were terrified on Easter Monday night over the presence of One Million Boys, a group of street urchins that metamorphosed into a cult.

There have been multiple robberies and looting in the state in the past two weeks occasioned by the coronavirus lockdown.

Over 100 suspects have been arrested so far and scores of ammunition, axes, cutlasses and other violent weapons have been recovered by the police in the state.

Our correspondent gathered that the hoodlums identified as members of the ‘One Million Boys’ gang operated at the Aiko Junction of Ogunrombi-Orisumbare Road in Idimu last night where they looted shops and bungled some homes around the Paiko, Ogunrombi and its environs.


Our correspondent also learnt that the robbery operation occurred between 8pm and 10pm on Monday.

An eyewitness told newsmen that some of the youths in the area, however, tried to scare away the hoodlums but their resistance was not without harm as one of the youths was badly injured in the head.

“The boys operated almost unhindered until some of the few brave youths in the area tried to deter the miscreants that came from Orisumbare to rob in Idimu,” the eyewitness said.

The youths were also said to have hurriedly formed a vigilante group, making bonfires and erecting all sorts of barricades within the area.

Meanwhile, efforts to reach the Lagos State Police Public Relations Officer, Bala Elkana, proved abortive as several calls to his line were unanswered and not returned as of the time of filing this report.