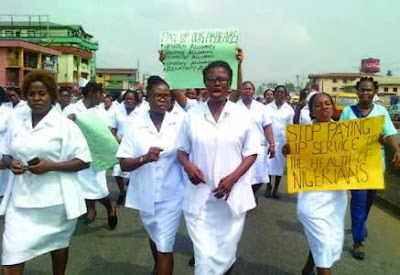 Members of the National Association of Nurses and Midwives working at the General Hospital, Ilorin on Thursday downed tools in protest against what they described as poor and risky condition of work.

They also complained of non supply of Personal Protective Equipment to safeguard them while treating suspected COVID-19 patients brought to the hospital.

Speaking during their protest in the hospital premises, the health workers lamented that the state government did not provide personal protective equipment for them in the accident and emergency units as well as other units despite the coronavirus pandemic in the state.

The nurses also said they worked two shifts of 10-14 hours daily without provision of call food or allowances as being provided for some other health workers.


The auditor of the association, Funke Alo, added that designated pick-up points for workers on duty were few, which made workers go through stress before finding their way.

While accusing the government and top management of disregarding their letter where they pointed out their challenges and the risk involved in the course of their work, the protesting health workers vowed not to resume work until the issues were addressed.

She said, “The nurses are working under a risky condition in this hospital. Those at the Accident and Emergency ward are not given the Personal Protective Equipment to protect them against the danger of contracting coronavirus which we has now crept into the state and we are not also paid hazard allowance as it is done in other states.

Efforts to get the response of the state government proved abortive as the state Commissioner for Health, Dr Raji Razak, did not pick all calls made to his telephone while the text message sent to the number was not replied as at the time of filing this report.

Meanwhile, the state chapter of the Nigeria Medical Association has directed its members not to consult or treat any patient without Personal Protective Equipment.

In a joint statement by the Chairman and Secretary of the NMA, Dr Kolade Solagberu and Dr Majeed Mohammed respectively, the association said it noted that there was inadequacy of PPEs in majority of the public and private hospitals in the state.