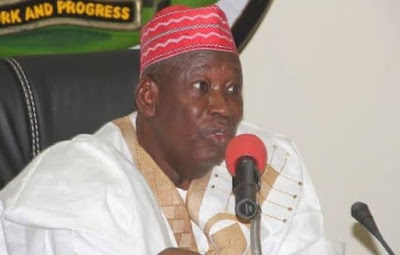 Governor Abdullahi Ganduje of Kano state has sacked the Commissioner for Works and Infrastructure, Engr Mu’azu Magaji, over utterances on demise of late Chief of Staff to President Buhari, Abba Kyari.

Magaji is believed to have rejoiced after the death of Mallam Kyari was announced by Special Adviser to President, Femi Adesina, early Saturday.

The action of the Commissioner, it was gathered, did not go too well with the Presidency and many criticized the act including Personal Assistant to the President on new media, Bashir Ahmad, posting on his official social media handle his dissatisfaction over Magaji’s action.

Magaji was relieved of his duties with immediate effect.


The remains of Mallam Kyari arrived in Abuja Saturday morning from Lagos and was buried at Gudu cemetery after funeral prayers at his residence.

A statement by the Presidency urged well-wishers and all other Nigerians to pray for the repose of the soul of the late Chief of Staff.

“A condolence register will be opened at the office of the Secretary to the Government of the Federation (SGF) from Sunday for those who are able to use the window permitted for movement by the FCT administration,” the statement said.