If by now you think coronavirus is a scam, I wish you well, SGF tells doubting Nigerians 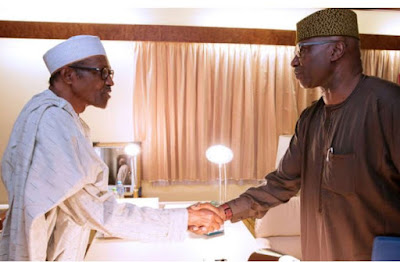 The Federal Government has once again emphasised the seriousness of the outbreak of the Novel Coronavirus (COVID-19) pandemic.

The Secretary to the Government of the Federation (SGF) and Chairman of the Presidential Task Force (PTF) on (COVID-19), Mr. Boss Mustapha, who emphasised the seriousness on Wednesday, spoke on the perspective in some quarters, where COVID-19 is believed to be a hoax.

The PTF also defrayed the claim being spread through the social media that members of the task force were being paid N500,000 daily sitting allowance, saying no member of the body had received any payment for their time and efforts since it was constituted

Mustapha responded to a question from one of the journalists at the event, talking about some parts of the country where there is the belief that the COVID-19 was an idea and not a real disease with capacity to infect or cause death.


According to him, the outbreak is not a joke, scam or hoax, but a real disease, which had killed thousands of people across the world, refering to a story of a Nigerian medical practitioner, who recently lost the battle against the disease in the United Kingdom.

“The Coronavirus is not a joke. Please, take it very seriously and listen to the government. Please stay safe and protect your loved ones, nothing is more important.

“Listening to this, I think we’ve gone past the stage, however ignorant a person is, wherever you live in Nigeria, for you to begin to assume that this is a scam, a hoax or a joke and I think those of you in the media have the responsibility for driving this point.

“This is not a joking matter, we’ve gotten to the stage where we are beginning to see some of the things that are happening in other climes.

“So, we ought to take it with every element of seriousness and for those that think it’s a hoax or a scam, I wish them well, but for those of us who believe that we ought to do everything humanly possible to contain this spread or limit the infection or mortality, we will continue to work day and night and that is why I solicit your support and cooperation in this particular endeavour”, Mustapha said.

The Minister of Information and Culture, Alhaji Lai Mohammed, described reports that members of the task force had been receiving half a million naira daily as sitting allowance as fake news, which should be disregarded.

According to him, no member of the task force had received anything as payment for their efforts. Rather, they had been the ones who had been expending their resources to carry out a national task.

“The issue I want to take on is that of the sitting allowance of half a million naira, paid to each of the members of the task force. You will remember that each time I come here, since I tested negative for Coronavirus, my other major problem has been fake news.

“As soon as I got that information, I consulted with my colleagues here whether I’m not a member of the task force and I asked them whether they’d received their own and they said no.

“What bothers me is that since about 2 O’clock this afternoon I’ve been receiving text messages to send money to people; that they were broke, they had no money and I began to wonder, why today? Apparently, they are acting on this fake news that we receive half a million naira everyday.

“The truth of the matter is that no member of the committee has received one penny, either for sitting or sleeping allowance, not even when we went to Lagos yesterday.

“So, you see this fake news is targeted at one thing alone: to distract the government from the more serious problem and task of containing and combating fake news.

“I want to say loud and clear; no member of the committee receives a penny as sitting allowance. Everybody sacrificed his time, energy and even sometimes his resources”, Mohammed said.