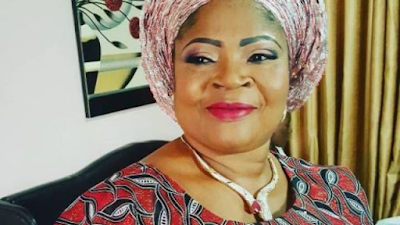 Waka music maestro, Salawa Abeni shocked many of her fans during the week, when she released some pictures of herself on Instagram.

Abeni did this after an individual identified as Jason had attempted to blackmail her with the photos. Jason had sent her the photos on WhatsApp, threatening to release more to the public if Abeni didn’t pay him. However, in a bid to frustrate his attempts, the musician released the photos herself.

Asked what gave her the bravery to release the pictures herself on social media, Abeni told Punch, “Firstly, I am not a child. I cannot even recall where that photo was taken. I’m not sure whether I was even in the hospital or with my partner. It must have been taken more than 20 years ago. I’ll be 60 next year and I have spent 46 years on stage, so for anyone to decide to blackmail me in this critical time when the world is on lockdown, battling the coronavirus pandemic; that is bad. So, since the person threatened to release the photo, I decided to ‘help’ him by posting the photo online myself.

“Whenever I travel abroad, I am treated importantly. So, why should someone be threatening me with blackmail in my own country? He was asking me to negotiate with him; that after I made the payment, he would make a video of himself burning the pictures. I put all the conversation we had online.


“Is nudity that sacred? I gave birth four times and I exposed my nakedness to the doctors and nurses at those times. There was nothing for me to be scared of. I have God and people behind me”.

She also thanked Nigerians for standing by her during the controversial incident.

“I don’t even know how to thank Nigerians and people from across the world. I always knew that people loved Salawa but I didn’t know it was this much. Since the time I put the picture