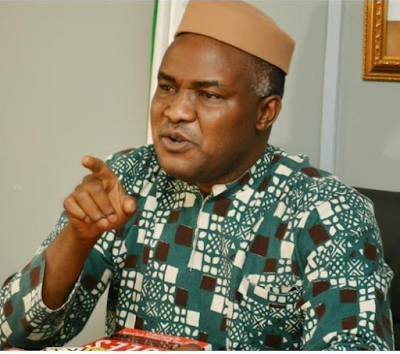 The Human Rights Writers Association of Nigeria, HURIWA, has appealed to President Muhammadu Buhari to direct the Acting Director-General of the National Biotechnology Development Agency to pay members of the 27 households of cleaners sacked by the agency before the Coronavirus lockdown their entitlements to prevent them from imminently starving to death.

HURIWA is asking the President to intervene so that they can receive their accumulated wage bills totalling over eight million Naira.

The rights group said if after the lockdown, the accumulated wages are not paid, it will initiate a petition to the President Muhammadu Buhari-led administration and also consider other non-violent civil disobedience strategies to compel the Acting Director-General to pay the suffering and starving disengaged cleaners.

The workers were dismissed when the then substantive Director-General of NARDA exited the agency and the acting DG was appointed.

The rights group said it was a grave violation of human rights including RIGHT TO LIFE for the authority at the federal government agency to be this insensitive to allow these 27 less privileged Nigerians to enter the lockdown without receiving their pay-offs.

“This is the worst case scenario of man’s inhumanity to man that less privileged citizens who laboured for months are being owed their lawfully gained payments by an authority that feels unsympathetic to their situations of joblessness and imminent starvation,” HURIWA said in a statement signed by its National Coordinator, Emmanuel Onwubiko and made available to DAILY POST on Thursday.

The rights group said it was approached by the representative of the 27 disengaged cleaners who are on the verge of imminent starvation and death.

The group said that it reached out to the Acting Director-General, Mr. Alex Akpa three weeks ago who then he promised to pay off the accumulated wage bills once the first quarter of the running costs are released to his office.

“HURIWA approached the Acting Director-General of NARDA and pleaded on behalf of these suffering families whose only means of survival and livelihoods he reportedly terminated when he assumed duty as the Acting head of that scientific agency under the Federal ministry of Science and Technology.

“He, the DG told us that the cleaners were disengaged because their services were no longer required going by what he called persistent complaints from the staff that the contract cleaners hired by the last substantive Director-General were not discharging their contractual obligations optimally and were in the habit of not cleaning up the toilets of the office facilities thoroughly which was almost threatening to lead to an outbreak of waterborne disease.

“The Director-General told us that his management has agreed to pay but that there was no money at that time even when Human Rights Writers Association reminded him that it was inhumane and unfair to let the 27 households enter the Lockdown with empty stomachs.”

HURIWA said it has become imperative that President Buhari’s attention is called “to this unfair treatment of poor peasants by an agency of the Federal Republic of Nigeria in which 27 households have been starving since many months and now that the country has been on lockdown for nearly a month, these less privileged Nigerians have been left to go practically without food or the necessities of life.”

HURIWA stated that the cleaners informed it that on February 20th 2020, after months of not getting their accumulated wage bills, they decided to send a letter to Director-General, National Biotechnology Development Agency to demand for payment in a letter titled Re: Contract for the General cleaning and sanitation, fumigation of National Biotechnology Development Agency through their solicitor under the corporate name of Messrs Wycombe WT2 of Leventis Close, Central Business District, Abuja.

HURIWA disclosed that in the letter, the cleaners had told the Director-General of the agency as follows: ‘Our client informs us that you are indebted to her in the sum of #8,470,000 (Eight million four hundred and seventy thousand naira only) which sum accrued to her under a contract for the general cleaning and sanitation of your office premises.

”Our client has passed on to us your letter with reference number NABDA/ LEGAL/188/46/1/1 of 3rd October 2019 wherein you acknowledged this indebtedness. Our client has instructed us to demand payment of the said sum from you and further to take necessary legal action if the said sum is not paid to our client within 30days of the receipt of this letter.”

HURIWA hereby serves a notice to the Acting Director-General to pay off these accumulated wages to stave off legal action against the agency by sympathetic lawyers to the distressed Nigerians for deliberately terminating the contract it signed with the cleaners only because they have no godfathers just as the non-payment of these huge sum to these 27 families has led to untold frustrations, hunger, starvation and poor health of hundreds of people who depend on these 27 cleaners for survival.