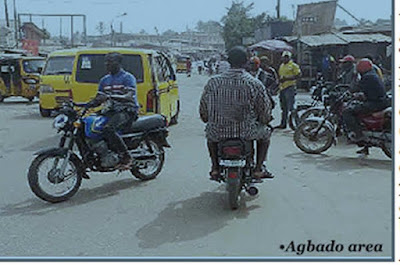 A notorious gang leader, identified simply as Felix aka Confidence, is on the run after unleashing terror on residents of Dalemo community, in the Ifo Local Government Area of Ogun State.

Felix, an ex-convict, had reportedly led his gang members numbering about 200 to invade the community around 9pm on Tuesday and rob any residents in sight of their valuables, including phones and cash.

City Round learnt that the gang also overran a checkpoint at Dalemo junction where some policemen enforcing the COVID-19 lockdown order were deployed.

It was gathered that the hoodlums operated freely until a reinforcement team led by the Agbado Divisional Police Officer, SP Kuranga Yero, arrived at the scene.


A resident of the area, who gave his name only as Debo, told our correspondent that it took the operatives some time to prevail on the hoodlums who confronted them.

He said Confidence had been terrorising the community and its environs for about two years but peace returned to the neighbourhood when he was arrested by the police last year.

He stated, “I learnt that he was released from prison recently. He has now returned to the community. Around 9pm on Tuesday, people were outside chatting when he and his boys stormed the streets and started robbing.

“They collected phones and money from anybody they saw and beat them up. They also invaded the police checkpoint at Dalemo Junction. Those policemen had to call for a backup from Agbado division. They (hoodlums) were about 200 led by Confidence. He is a young slim man of about 25 years old but he is dangerous.”

Another resident, who spoke on condition of anonymity, said the thugs also raided neighbouring communities – Campbell, Odewale, Ojurin and Ope-Ilu, where they were repelled by some angry youths.

“Confidence is a notorious criminal. He was arrested by the police with a gun last year. I was surprised when I saw him on the street about one month ago. His group is called Fesemule and he has about 200 gang members. They usually invade a place en masse and rob people,” the resident said.

A police source disclosed to newsmen that the gang chased the policemen deployed in the scene a run for their money, adding that two suspects had been arrested.

The source recalled, “Around 9pm on Tuesday, the hoodlums on motorcycles invaded the checkpoint of policemen posted at Dalemo Junction to enforce the lockdown order. They started throwing weapons and the policemen took cover.

“They had to call for reinforcement. As the team led by the DPO approached the scene, the hoodlums started hurling stones at them. They occupied one end while the police were on the other end. It took some time before policemen were able to chase them away. Two of them were arrested.”

Another reliable source told our correspondent that Confidence held Dalemo to ransom for several months before he was arrested.

“He was charged but was released from prison about one month ago. He has started causing panic in Dalemo now. If the police are not many, he would confront them,” the source added.

In a related development, residents of Ifo were thrown into confusion on Wednesday when some suspected cult members robbed some houses.

A landlord, who spoke on condition of anonymity, said the assailants operated within the community for three successive days.

“I heard them moving from one street to the other. Many people were awake but we could not come out. It was later that some vigilantes chased them,” he stated.

The Ogun State Police Public Relations Officer, DSP Abimbola Oyeyemi, confirmed the two incidents, adding that some arrests had been made.

He said, “He (Confidence) is an ex-convict. He was just released from prison after spending eight months. Two of his gang members terrorising the community have been arrested. We are seriously looking for him.

“We are on top of the situation at Ifo. Anti-Cultist team and conventional policemen have been deployed there and we have arrested some of the hoodlums.”