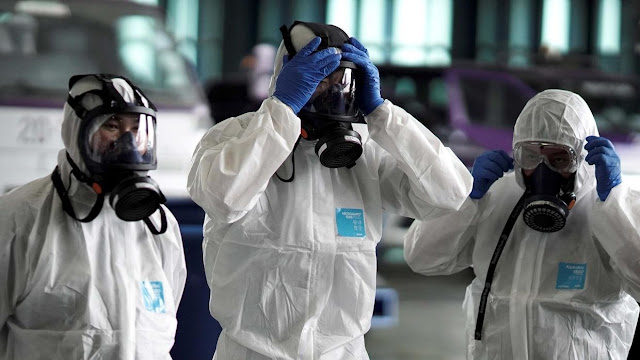 France on Tuesday crossed the threshold of 10,000 deaths due to the coronavirus, with 7,091 recorded in hospital and 3,237 in old age homes, a government official said Tuesday.


France has been under lockdown since 15 March, with fines for violations.

On Tuesday, Paris said it would ban people from exercising outdoors between 10:00 and 19:00 local time.

The new restriction came after a sunny weekend marked by large groups of people running and walking in the city's parks, despite police controls.

In the last 24 hours, 607 people died in French hospitals - almost exactly the same number as in the previous 24 hours - and 820 deaths were reported from care homes. However, this last figure is difficult to assess because it probably includes deaths that took place over the weekend or in care homes that have only now been able to provide their figures.

The epidemic is still in its "upward phase," Director of Health Jérôme Salomon said, with the number of daily deaths, hospitalisations and critical cases still going up. "The peak has not been reached," he said.

However, there are signs that the rate of growth is slowing. The number of critical cases was up only 59 on the previous day, because the rise in new cases (518) was largely compensated by people coming off the critical list.

Doctors have expressed cautious hope that the worst scenario - of hospitals being overwhelmed - has been avoided.

But Mr Salomon said that talk of ending confinement was premature. "Letting off the pressure now would be dangerous," he said, echoing Prime Minister Édouard Philippe, who earlier said that national quarantine was "going to last".

There is widespread expectation that the government will extend confinement beyond the current end date of 15 April.

Earlier on Tuesday, French President Emmanuel Macron visited the Paris suburb of St Denis, one of the worst-affected areas in the country.

It is the poorest administrative department in urban France, and the number of deaths rose by 63% in the last two weeks of March. The reasons are unclear.