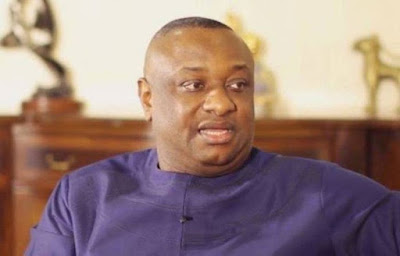 Minister of State for Labour and Employment, Festus Keyamo, SAN, has threatened to resign from the President Muhammadu Buhari’s administration if the approved recruitment of 774, 000 people is hijacked by politicians.

The Minister, issued the threat on Wednesday while inaugurating the Inter-Ministerial Committee on Extended Special Public Works Across the 774 Local Government Areas of the Federation.

Mr. Keyamo who explained that the committee was set up to devise a strategy for the implementation of the job creation, said the pilot scheme was approved to be implemented in five local government areas in eight states of Adamawa, Borno, Ebonyi, Edo, Ekiti , Jigawa, Katsina and Kwara.

The beneficiaries he said will be engaged in drainage digging and clearance, irrigation canals clearance, rural feeder road maintenance and maintenance of the great green wall nurseries as well as orchards.


Others are traffic control, street cleaning, cleaning of public infrastructure like health centres, schools and the likes, adding that a total of 40.000 direct transient jobs were expected to be created in the eight pilot states.

The minister said the programme was designed to mitigate lack of job opportunity in the rural area through short term engagement of one thousand (1000) unemployed persons per local government for a period of three months.

He said the programme which is a dry season transient job projects is targeting the rehabilitation/maintenance of public and social infrastructure with the participants largely drawn from the pool of unskilled rural persons.

Asked if politicians won’t hijack the process, the minister said, ”this is not for PDP or APC, who will want slot from my local government because I am a politician, but I assure you it will not happen.

“I will leave this job, if they want to insist that it will happen. Mr. President is targeting ordinary Nigerians who are neither PDP nor APC nor just anything. They just want to get jobs, they just want to feed their family.

“This is not a time for us to empower our followers as politicians. We are going to dig deep, it is one of the recommendation you are going to make, that is why you are here.”

He tasked members of the committee to make recommendation on how best the projects can be executed.

“Recomend to us a model to adopt, we will meet Mr. President for approval. The various interest groups, Traditional Rulers, NURTW, representative of the people and so on. Those who have direct contact with the people at the grass roots.

“Let us make it clear today that, we are not going to bow down to the pressure of any politician to come and hijack this program, it will be well modeled, well executed and it will reach ordinary Nigerians, ” he said.

He recalled that President Buhari had in October 2019 approved a pilot special public works programme, for implementation by the National Directorate for Employment (NDE) in five Local Government Areas each of eight pilot states.

He said that the programme was a Federal Government job creation drive, designed to “mitigate lack of job opportunity in the rural area through short term engagement of one thousand (1000) unemployed persons per Local Government Areas (LGA) for a period of three (3) months,” with a payment of N20,000 monthly allowance to the beneficiaries.

The Minister described the programme as “a dry/off season transient job programme targeting the rehabilitation/maintenance of public and social infrastructure with the participants largely drawn from the pool of unskilled rural persons”.

He noted that the approval by the President for the extension of the programme, and the subsequent rise in its magnitude, necessitated the setting up of an inter-ministerial committee, for effective planning and proper implementation.

The Minister mandated the Committee to collate the respective rural programmes in each ministry; Review the implementation of the pilot programme and make recommendations where necessary; Recommend appropriate monitoring and evaluation mechanism and, develop an achievable implementation time line.

He expressed confidence of the Federal Government in the ability of the Committee to carry out the task before it beyond expectations, and with minimum waste.