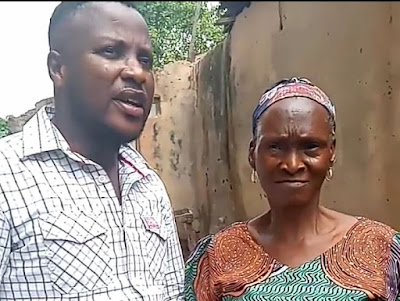 Michael Collins Ajereh, Nigerian music producer better known as Don Jazzy, has gifted an elderly woman N100,000 after she had offered to sleep with any man who could give her N500 to feed herself and her children.


On Friday, Kolawale Atanda Adejojo, a journalist, had shared a touching video of the aged woman making this demand in Igbore, Abeokuta, Ogun state, on his Instagram page.

In the short clip, a man can be heard in the background talking to her in Yoruba dialect as he asked her what she intends doing. She answered, saying she is willing to sleep with any man who gives her N500 to get food for her children.

“You said if you’re hungry, you would do what?,” the man asked. “I will sleep with a man,” she replied.

“Are you still sexually active?,” he prodded further. “Yes I am, I still have a v**ina,” she answered.

“You said you will do this for how much?,” he asked again. “I will sleep with any man that can give me N500 to feed myself and my children, look at them over there, they have not eaten this morning,” she replied.

“So you will let a man sleep with you?,” he asked once more. “Yes, it is better than stealing isn’t it?” she retorted.

The video, which had gone viral on Saturday, caught the attention of some sympathetic Nigerians including Don Jazzy, who then sent his contributions to alleviate the plight of the elderly woman.

Don Jazzy would then bless the woman with N100,000 which was delivered through Kolawole.

Kolawole also posted a video in which the woman confirmed she had received the money. She also expressed her gratitude to the music producer through thanksgiving and prayers.