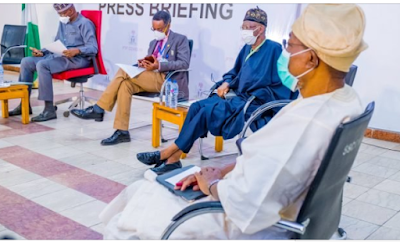 The SGF, who is also the chairman of the presidential task force on COVID-19, said there have been efforts by the Central Bank of Nigeria (CBN), corporate bodies and individuals to raise funds but government has no control over the initiatives.

At a briefing on Thursday, Mustapha said an account which would be under their control has just been opened and no transaction carried out yet.

“Let me inform the nation that so far, the presidential task force has not received any donation directly in terms of cash for this exercise,” he said.


“We have received donations of materials particularly from the ones that came from Jack Ma, the Chinese billionaire and that has adequately been distributed by the Nigeria Centre for Disease Control. In terms of monetary contribution, the national coordinator has just informed you that different organisations and individuals are pioneering that in their efforts.

“They have a funding committee, they have an operation committee and they have a technical committee. They are going to run, fund, execute projects, buy equipment all in furtherance of fighting coronavirus. At the end of the exercise, they have explained in their document that they will appoint an accounting firm that will take an audit of their exercise and make a report to the donors for the purposes of accountability and transparency. Government does not have control of those funds, the presidential task force does not have control of those funds.”

The SGF said the second effort is the one initiated by the Nigerian National Petroleum Corporation (NNPC) which involves the upstream, the middle stream and the downstream levels of the oil and gas industry.

He said third is the one being driven by the United Nations family, and they are also raising funds from their own donor agencies and partners.

The fourth source of funding, he said, is what the government will put into the coronavirus engagement.

“I have just received a letter from the accountant-general informing us of the account that has just been opened yesterday,” he said.

“So, obviously no funds have gone into any account. Hopefully in the coming days, we would receive funding for the work of the presidential task force in terms of the different components of the multilateral or sectoral engagements. That is the one government will have control over and at the end of the enterprise, we would account for it.”