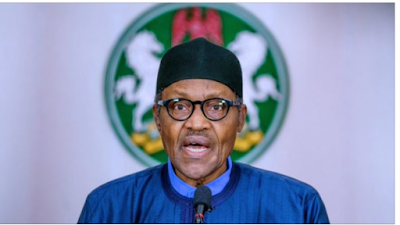 Some Nigerians on social media have described Nigerian leader, Muhammadu Buhari as President in absentia, saying that he is not addressing them from a known location.

They insisted that their president should rather have a media chat on issues surrounding the Coronavirus pandemic instead of standing in an unknown location and reading out a written speech to them.

Some of them went further to claim that the president’s media aides, Femi Adesina and others were playing recorded speech for Nigerians aided by the Nigerian Television Authority, NTA.

This argument broke out after Bashir Ahmad, President Muhammadu Buhari’s aide on New Media mockingly shared a post of a Twitter user who doubted if the President makes his national broadcasts from Nigeria or somewhere outside the shores of the country.

Ahmad had shared a tweet from @JohnnetworQ, which reads, “All I’m saying is let him address the nation from a known location in Nigeria holding today’s papers. How can Buhari be a President in absentia in a time like this? Please Ghanaians on the TL how can I get a passport? Enough is enough. Enough is Enough. If Buhari cannot have a media chat where questions would be thrown at him there and then as regards the pandemic then he better just pass the white paper to whoever is behind his Twitter handle to tweet. Let the man earn his salary FFS. @BashirAhmad tell him.”

Responding to this, Ahmad tweeted, “Two types of enough is enough,” but other Nigerians did not find it funny.

@CJ_Ubaka wrote, “Bash your pictures don’t prove anything. Those flags, coat of arms and paraphernalia can be carried in the boot of one Presidential car and set up in one hotel in Saudi Arabia or UK.

If Buhari’s whereabouts is in doubt, this tweet hasn’t proved that he is in Nigeria.”

@therealsamadi, “On a serious note, if Mr. President is not having a media chat, there is no need to belabor him to stand for minutes reading. Please let the paper be published. It’s easier for us to read than struggle to understand what he is saying. Respect to Mr. President @MBuhari.”

@Kennyoamusan, “Thanks to Femi Adesina & Co for the pre-corded video. They have already recorded it through NTA as usual. Only wish other stations could be there too unlike them depending on NTA every time or better still a media chat ,..But by 7pm Sha ,they would press ‘PLAY’ and we would hear.”

@iamnoone_99, “Oga na scam, let us hear him reason independently, put his thoughts together while different concerns of the people are thrown at him… We need to see and hear him speak directly from his heart! Anything else na scam!”

@iam_eno, “Both valid points. Every other president walks up to the media with a written speech to address through the media. Why does ours need to be dressed and positioned, speech edited and flash drive sent to NTA ?”