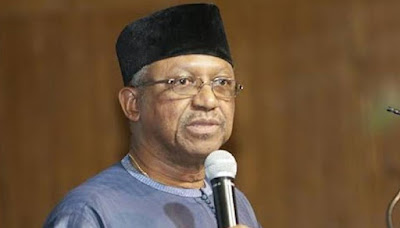 The Speaker of the House of Representatives, Femi Gbajabiamila, on Thursday, gave the Minister of Health, Osagie Ehanire, a dressing down for stating that he didn’t know if health workers treating COVID-19 patients were being paid hazard allowance or not.

The National Association of Resident Doctors had last week stated that Nigerian doctors were receiving N5,000 a month as hazard allowance.

Doctors at the University of Abuja Teaching Hospital isolation centre had told newsmen that they were being owed over N30m in allowances.

The National Assembly subsequently invited members of the Presidential task force on COVID-19 to address some issues.


Gbajabiamila asked the minister if the medical personnel handling coronavirus cases are paid any hazard allowance, to which he responded: “I am not aware of it.”

The Speaker, who seemed disgusted by Ehanire’s response, told the minister it is not enough to say he is not aware, and “you dropped the ball”.

The video of the incident has, however, been trending on social media with many Nigerians calling on the minister to resign immediately.

Nollywood actress, Kate Henshaw, agreed with the Speaker that the minister ‘dropped the ball’.

She tweeted, “Minister of Health, Osagie Ohanire, you are not aware? What are you aware of? These doctors and nurses and other support staff put their lives on the line daily and even more so now!! More so now!!#TheirLivesMatter. You dropped the ball just like @femigbaja”

@DrOlufunmilayo tweeted, “In sane countries, that kind of nonsense statement made by the minister of health is a career-terminating statement. How can you go to the parliament of lawmakers to tell them you are not aware of any hazard allowance for health workers fighting coronavirus? How can you say that?

“If the minister of health had any shame, he would tender a well worded apology for being an embarrassment to the health ministry and he will follow it up with an immediate resignation from the office and from public consciousness. That clown display yesterday was a catastrophe.”

@AfricanCandy also tweeted, “A whole Minister of health just openly said ‘he’s not aware if health professionals are paid hazard allowance’. He just disclosed he’s not competent for this job. What a shame!”