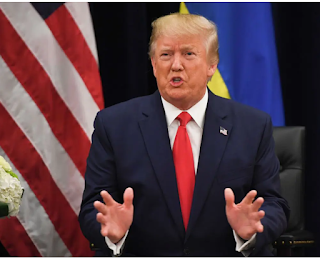 President Donald Trump has threatened to bill China a ‘substantial’ amount for damages caused by the coronavirus.

Trump revealed this at a press conference at the White House.

When asked if he has considered seeking money from Beijing for its response to the pandemic, Trump said he had a ‘much easier’ idea.

According to him, he was planning on obtaining much more than what the Germans were suggesting.

A German newspaper had published a mocked-up bill of a $160billion invoice for the impact shutdowns have had on the economy following the spread of the infection from Wuhan to Europe.

According to Daily Mail, he said, “We have ways of doing things a lot easier than that,’ Trump told a coronavirus press briefing Monday in Washington DC.