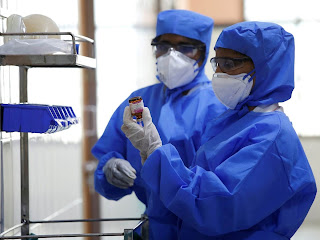 The novel coronavirus has killed 1,000 people across Africa since the pandemic emerged late last year, according to an AFP tally using official figures.

Algeria is the African country with the highest number of deaths at 364, followed by Egypt with 205, Morocco 135 and South Africa 50, according to the figures compiled at 2000 GMT on Friday.

African countries have recorded a total of 19,334 infections since the virus emerged in China in late December, the figures show.


Africa has so far suffered less than other regions from COVID-19, the disease caused by the coronavirus — at least according to official numbers.

But limited testing in many countries has deprived African officials of a full picture of the disease’s spread.

The worldwide death toll has topped 150,000 people while more than 2.2 million infections have been declared.

Health experts have warned of the devastation the deadly virus could cause in Africa, where most hospitals are desperately short of equipment and trained staff.

The World Health Organization last month warned Africa faced a dramatic evolution of the pandemic even as governments imposed restrictions, curfews and travel bans to help curb the spread. The continent appears poorly equipped to manage a major health crisis and is struggling to test enough to monitor virus cases.

Containment measures in poorer parts of Africa have also been difficult to enforce in impoverished and densely populated neighbourhoods, where houses are overcrowded and most survive thanks to informal work.

The World Bank and IMF said on Friday that Africa needs $44 billion more to fight the coronavirus pandemic despite a freeze in debt payments for many countries and massive pledges of support to help the continent prepare for a possible surge in infections and the economic fallout.