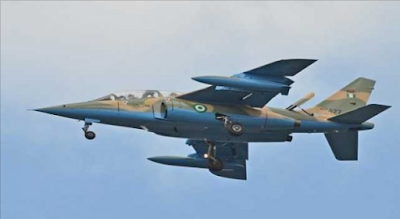 At least 17 people were said to have been killed when a fighter jet belonging to the Nigerian  Air Force fired a bomb on Sakotoku village in Damboa local government area of Borno state.

Residents revealed that those killed included women, and children who were said to be playing under mango trees.

The air force, military sources said, was informed that Boko Haram insurgents were gathering  around the village on Thursday afternoon.

The supposed target, according to a source, was an area in Korongilum, a neighbouring village 12 kilometres away where suspected Boko Haram insurgents had gathered earlier.

“We don’t know if they didn’t communicate well with the land troops as the air force jet fired that bomb on the village,” one of the sources said.

“Seventeen people were killed, mostly women and their children playing under mango trees. Many were also injured and have been taken to the 25 army brigade in Damboa, and those with critical injuries were taken to Maiduguri.”

Some of the villagers whose houses were destroyed have found their way to Damboa.

In February, residents of Garkida, Adamawa state and Korongilum, Borno state, had alleged that NAF fighter jets refused to open fire on suspected Boko Haram insurgents when they attacked their communities.

Ibikunle Daramola, NAF spokesperson, had then said they could not engage the insurgents because the situation in Garkida was chaotic, and that they took the measure so they would not hit civilians.

In 2017, 126 civilians were killed in Rann, Borno state, in an accidental air strike by the military.

When contacted about the incident in Sakotoku, Daramola said: “It’s a matter of operation” and the defence headquarters would be in a better position to speak on the matter.”

Both Onyema Nwachukwu and John Enenche, defence headquarters spokespersons, were not reachable for comment as they neither responded to calls nor replied text messages.