Archbishop Samson warns President Buhari - 'Do not accept help from China, Coronavirus will worsen if you do' 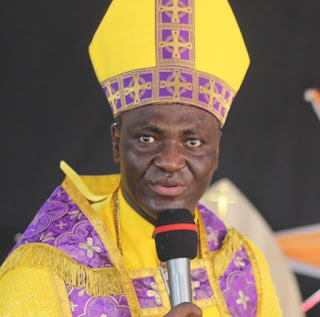 The cleric, in an open letter to President Muhammadu Buhari, a copy of which was made available to newsmen on Saturday, stated that accepting or purchasing any equipment or personnel from China to fight the coronavirus disease would be a very risky venture for Nigeria, and by extension the African continent.


Benjamin was reacting to the announcement by the Minister of Health, Osagie Ehanire, who disclosed on Friday that Nigeria was expecting a medical team from China to aid in the fight against COVID-19.

He also stated that some Chinese companies in Nigeria had donated medical supplies to support the country in its fight against COVID-19.

But Benjamin, who is the founder of the Resurrection Praise Ministry Worldwide, said such a move would be counter-productive and should be jettisoned, as it could worsen Nigeria’s situation.

Many Nigerians, he contented were not comfortable with the move and would voice out their reservations in given the opportunity.

He called on government to always listen to the voice people they lead, while coming up with policies for the country.

“Many advanced countries of the world have rejected these things being brought to Nigeria from China because they were found to be defective, yet Nigeria wants to accept them with open hands


“This virus originated from China, yet their factories have miraculously reopened to manufacture these things for other people.

“Do we have the capacity to test these materials being brought to us to be sure they are safe for our use?”, he asked.

“Yes, we may need help in fighting this pandemic, but China is the ‘wrongest’ place to look up to now at this point”.

While commending the government, at the federal and state levels for the efforts so put in place to fight the COVID-19 disease, the Archbishop said there was a need to contain and control the virus instead of taking the risk of throwing the doors open for a possible further infections.

According to him, the nation’s health system would not be able to withstand a full-blown outbreak of the virus, hence the need to exercise more caution before accepting any aid from China.

“There are claims from many quarters that this virus was a deliberate sent out. Though not confirmed, Nigeria should realize that as a leader in Africa, whatever it does would be emulated by other African nations. So we have to be very careful before taking such steps”, he stated.

He lamented that proponents of the China alternative may just be pushing it for selfish reasons, and said “they forget that money would be useless to them in the situation they want to create, if the disease becomes widespread in Nigeria”.