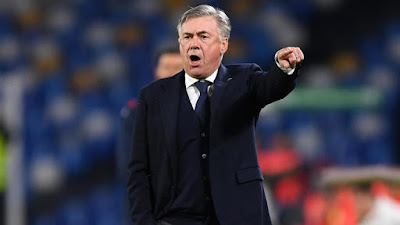 Before the Premier League starts up it must ensure all clubs resume training on the same day, Everton manager Carlo Ancelotti, told a French magazine in an interview published on Friday.

The Premier League is on hold because of the coronavirus pandemic and is scheduled to resume on May 3. But Ancelotti said the situation would be clearer after a meeting between clubs and league officials on Friday.

“One of the important things is that all the clubs resume training at the same time, that there are no disparities, that no one has an advantage over the others,” the 60-year-old Italian told L’Equipe. “Players nowadays are capable of being physically ready within a fortnight.”

Ancelotti, who took over at Everton in December, has won the Champions League as a player and the coach and has led teams to league titles in Italy, Germany, France and England.


After more than 45 years in the game, he finds himself in a world without football, preoccupied with the terrible toll the coronavirus pandemic is taking, particularly in his native Italy. Unsure of what is going to happen next, he is calm in the face of the uncertainty.

Confined to his home in Liverpool and with no players to coach or matches to watch, he is in no rush to return to the managerial treadmill.

“It’s a little strange to me. It’s something I’ve never done,” he said.

The whole Everton squad stayed in England and none have tested positive for COVID-19, he said.

“I keep in touch with the players. I don’t call them regularly but, with the staff, we send them a training programme that we update to keep them in good physical condition. Even though I know they are.”

Even if the league does resume on May 3, players will have gone seven weeks without collective training.

“It’s a lot, but a player has no problem taking part in a match after a seven or eight-week break. Of course, he won’t be at 100 per cent when he resumes, but he has the ability to do it, there’s no doubt about that,” he said. “You train while you play.”

He says he is talking to friends and relatives in Italy by phone.

“It’s very painful to hear that so many of my compatriots are dying every day.”

While he said the pandemic was “like a war,” Ancelotti remained optimistic about the future.

“It’s unfortunate to have to mourn so many deaths, but this crisis will bring society back to other, more human relationships.

“We are becoming aware, during confinement, that it is important for a daughter and her father or a husband and wife to talk to each other and communicate more. We are regaining the desire to talk and not just to have our noses on the phone.”

“We spend all our time running and it feels good to take a break.”

“Football is not my priority at the moment. In fact, I don’t care whether we’ll be back in June, July or August. I really don’t. There are lives we have to think about now.”