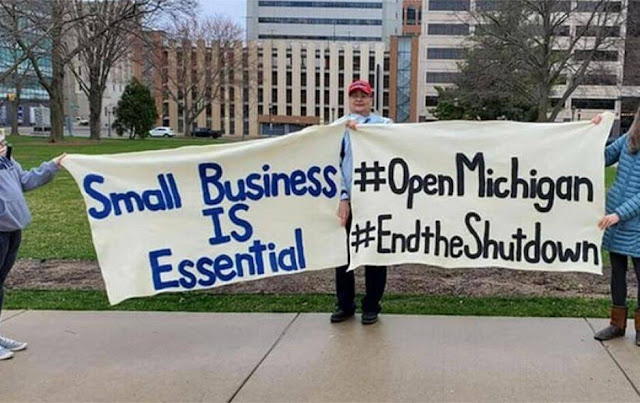 Protests erupted in several states across the U.S. this week, demanding that stay-at-home orders to stem the spread of the new coronavirus be eased.

Michigan, Ohio, Kentucky, North Carolina and Utah are among the states that saw rallies in recent days as concerns mount over the economic fallout of the measures.

U.S. President Donald Trump on Friday appeared to throw his weight behind demonstrators in three states with Democratic governors.

A few dozen protesters gathered in Virginia’s capital a day earlier, and a demonstration was expected in Minnesota later on Friday, according to local media.

Michigan saw one of the country’s biggest protests on Wednesday, when the streets of its capital were gridlocked by thousands of drivers pushing back against some of the nation’s toughest restrictions on travel and business.

“People are upset because they believe the restrictive order is taking away their fundamental civil liberties and freedoms,” Michigan House Republicans said in a tweet.

Some prominent figures on the right, including talk show host Rush Limbaugh, have expressed support for such demonstrations.

“The more they’re out and about, the more likely they are to spread Covid-19,” Michigan’s Democratic Governor Gretchen Whitmer told CNN, saying that could result in a further extension of the directives.

On Friday, Whitmer said she hoped to relax some restrictions on May 1, though she stressed data would drive decisions, as Michigan has the third-highest death rate due to the virus among U.S. states.

“It’s two weeks away, and the information and the data and our ability to test is changing so rapidly, it’s hard to predict precisely where we’ll be in a week from now, let alone two weeks,” Whitmer told broadcaster ABC.

Trump, who has repeatedly said he wants to reopen the economy as soon as possible, unveiled guidelines to do so on Thursday.

But he left the ultimate decision on when to move ahead with the plan to state governors.

He has clashed with governors on the matter in recent weeks, and on Friday upped the tension with a series of tweets.

After New York Governor Andrew Cuomo reiterated that the state could not reopen its economy without more widespread testing and needed federal assistance to do so, Trump tweeted that the governor “should spend more time ‘doing’ and less time ‘complaining.’”

“Get out there and get the job done,” the president wrote.

“If he’s sitting home watching TV, maybe he should get up and go to work,” he said, adding: “Let’s keep emotion and politics out of this and personal ego if we can, because this is about the people.”

Cuomo said the number deaths due to the virus “refuses to come down dramatically,” with 630 more people dying in a day, taking the death toll to over 12,800 in New York, the epicentre of the outbreak in the U.S.

The country leads the world in reported coronavirus cases and deaths, at more than 671,400 and 33,200, respectively, according to a tally by Johns Hopkins University.