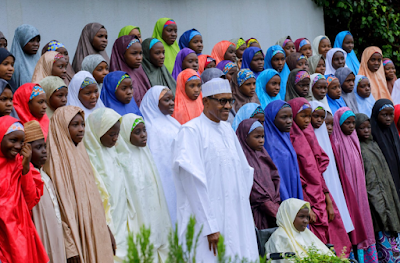 Yesterday, Monday April 14 makes it exactly six years since the Boko Haram insurgents whisked away the girls numbering 276.  57 of the girls however escaped while 107 of the girl were released in deal between the Nigerian government and the insurgents.

Speaking with the Hausa service of the British Broadcasting corporation (BBC Hausa), Spokesperson for the Kibaku Area Development Association (Chibok Community), Dr Allen Manasseh, said that some of the parents of the remaining abducted girls have become sick due to restlessness and have subsequently died due to frustration. “It’s even better to be told that your daughter have been killed, that will make you cry and forget and won’t be thinking again, but in this case, no one is telling us anything…this is very frustrating…” Manasseh said. “….All the promises the government made to release the girls have not been fulfilled this creates alot of worries to the parents” he added.


Dr Manasseh whose two cousin sisters are among the remaining abducted girls told the BBC how he lost his aunt i.e mother of the girls because of frustration. “….Although some few of my sister made the list of the 82 released girls, I still have two cousin sisters; my Aunty’s children still in Captivity, they are twins, one is called Rebecca, the other is called Sarah, they where all abducted 6 years ago and their mum (my aunt) died as a result of frustration. She was the first to die among parents of the abducted girls” Manasseh said.

Dr Manasseh emotionally explained to the BBC how he was so closed to the twin girls before their abduction 6 years ago recalling how he used to buy them provisions whenever the are resuming to school. He said the Nigerian government has intentionally neglected his family and other parents of the abducted Chibok school girls. “…Since the abduction, no one has spoken to the parents of the abducted girls… atleast the government should once in a while speak to the parent….They don’t necessarily need to make promises, their consolation means alot to the parents….” Manasseh added.

Asked to react on the recent claim by government that it is working hard to bring back the girls, Manasseh said that the chibok community totally disagree with the government saying the government is lying. “…. Why are they just saying this now, it’s been six years since the girls have been abducted and the government only talk deceptively during events, this is bad….if they can be talking to the parents time to time atleast it will lessen the pains” Manasseh said.

The abduction of the 276 girls have become a global issue that led to the emergence of he “Bring Back Our Girls(BBOG)” movement in Nigeria.