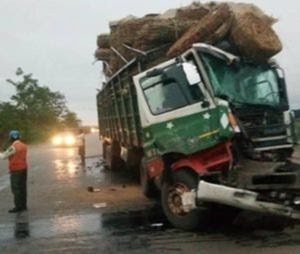 One person was confirmed dead while three others sustained various degrees of injuries on Sunday in an accident involving two trucks around Kara, Ayetoro area on the Lagos – Ibadan expressway.

He explained that the driver of the DAF truck conveying livestock apparently slept off on the wheels, lost control and rammed into the truck ahead.

He added that three people were injured in the accident while one person died.


“We learnt the driver of the truck conveying livestock and goats, which was inbound Lagos from Kano, dozed off behind the wheels, due to fatigue and in the process lost control, hitting the truck ahead.

“The three injured victims and the deceased were all occupants of the truck conveying livestock and goats.

“The Hausa community has taken the injured victims for treatment while the corpse of the dead was also released by the police for burial according to Islamic injunctions,” he said.