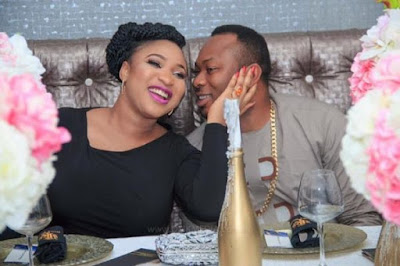 Tonto Dikeh, a Nigerian actress, and Olakunle Churchill, her ex-husband, have reignited their war of words after the former called the latter a “bisexual man.”

Dikeh, 34, has been in a protracted feud with Churchill ever since they ended their short-lived marriage — a union that has birthed numerous allegations and repeated counterclaims.

On Monday, the movie star struck the first blow at the father of her son after she asked fans what they’ll do if they discover that their partner is bisexual.

“You wake up one day and you discover you are married to a bisexual man. What will you do? I walked out,” she wrote on her Instagram page.


“For those of you who say God forbid, well I hope you know that 60% of the men we marry sleep with men or y’all still casting and binding for change.” 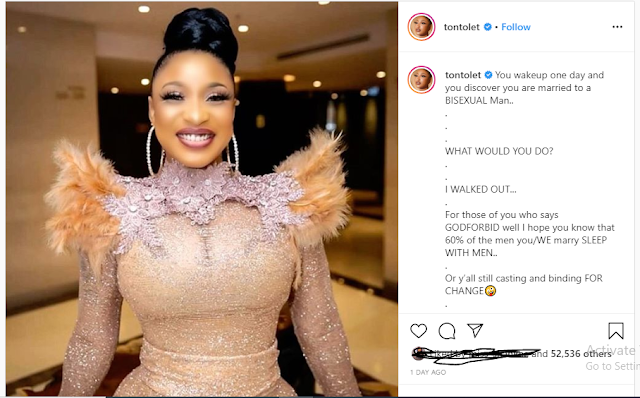 He also charged Nigerians not to succumb to those instigating Twitter trends with his name.

“Churchill is the new Nollywood. Script attached to 6 months of staying together as partners turns 20 years of bad marriage experience sweet-coated with humongous lies,” the businessman wrote.

“Nigerians should not succumb to the temptation of anyone using my name to trend ‘Churchill’. Idleness gives room for pointless reactions. Focus on your career and leave me the hell alone.”

Still unsatisfied, the actress taunted Churchill for assuming he’s the only ex she has had. She also clarified who her rants were directed at, stating that he’s the “bisexual ex I was referring to.”

“This goat thinks he can trend me? I gave you this fame, calm your sore butt down. I am the news, I will trend your whole village and make them semi celeb wannabe as I did you,” she wrote.

“And go defraud someone innocent souls or look for the next woman to pay your bride price…#You do yours in the dark like the coward you are and I do mine in the open. You are a glorified idiot.

“This one has serious brain damage. I talked about ex and this 40 seconds cow thinks he’s the only. You’re just a word in a chapter, although you’re the bisexual ex I was referring to.”

Churchill had filed a N500 million suit against Dikeh after she had made some claims about him, which she said had prompted their divorce.

Churchill had last year also threatened legal action against the actress, petitioning the inspector general of police over her “illegal sale” of his N22 million Toyota Prada SUV.

In 2015, Dikeh and Churchill had walked down the aisle. The union was blessed with a son. They, however, called it quits in 2017, following series of heated quarrels and irreconcilable differences.