What God told me about coronavirus - Pastor Adeboye

9:32 AM CuteNaija 0 Latest News in Nigeria 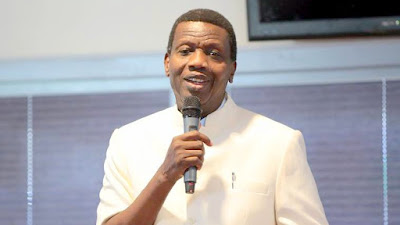 But the virus will not die completely, he added.


Pastor Adeboye spoke to a congregation of less than 20 in compliance with the directive of the Lagos State government to limit gathering of people as a precaution against the spread of the virus.

Those at the service also observed social distancing by staying apart from each other.

“Major nations of the world are locking down; even the smaller nations are also shutting down because of the restrictions and the risk on air travel at the moment.

“But the good news is that as soon as He has achieved his purpose by showing how big He is, He would suppress but not completely remove this plague. But I cannot tell you how soon that will be. Even if he suppresses the plague now, everyone has seen how mighty He is”.

Adeboye said the spread of the virus and the lockdown in many countries is a fulfillment of the prediction that the world will be sent on “a compulsory holiday.”

Recalling one of the prophecies, Pastor Adeboye said: “At the beginning of the year when I was delivering the prophecies, God said the world will behave like a child in convulsion, I took that to mean series of earthquakes, hurricanes, tornadoes, flood, fire, volcanoes and other natural disasters.

“The Lord also told me loud and clear that this year the world will be on compulsory holiday; that was a bit difficult to explain. So, I assumed it was going to be another incident like the 9/11 bombing of the World Trade Centre Towers in the United States (U.S.).

Adeboye said he was afraid to fully disclose what he he saw as he be might be accused of being privy to the planning of a lurking calamity.

He described COVID-19 as God’s way of showing His almightiness. He assured members of his mission who heeded his advice to fast for 50 days that they should not be afraid of the virus and told those who did not fast to begin fasting immediately.

“I asked you to fast for 50 days, you didn’t ask why. You went ahead because you trust me. With the same trust, I want you to go ahead and relax; there are no problems and plagues for you. You can take the word of God from me”.

He, admonished members of the not to entertain any fear or panic but to increase the level of their personal hygiene and comply with directives from the government by “sitting at home.”