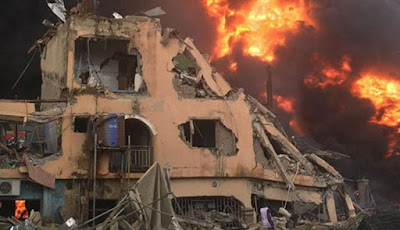 Linda Adanma Onuoha, an eyewitness of the tragic Abule –Ado explosions has stated that she was washing her clothes when she abruptly heard siren-like noise.

Onuoha said she saw a thick whitish powder oozing from a gas pipeline.

She said: “Shortly after, another thick whitish powder oozed again and I heard a deafening noise. I didn’t smell gas at all. I started shouting.

“I called my male neighbours. They came out. This time, we couldn’t see one another again. The whole place was full of that whitish substance. We all managed to go out.


“On getting to the end of that street, we heard a heavy bang. The force threw us away. That woman (pointing to her neighbour) was naked because she only tied a wrapper. By the time we knew what happened, we had lost everything.

“In our compound, four people are in the hospital and one person is still missing. I’ve been sleeping in my younger brother’s house since Sunday.”

Onuoha further urged the government to help them with shelter.

In the same vein, her relative, Chuks Onuoha, said she was in the church when the explosion happened.

She said: “My church is at Orientation and I heard the explosion there. I was still in church when my neighbour called that Abule-Ado is in shambles.

“What I use to sustain myself, my sewing machine is nowhere to be found. Let the government help us with a roof over our head. They should also help us financially so that we can begin again. I’ve lost my source of livelihood now, where do I begin from?”

A member of the Lagos State House of Assembly, representing Amuwo-Odofin Constituency I, Mrs Mojisola Alli-Macaulay and Chairman of Amuwo-Odofin Local Government, Valentine Buraimoh, hailed Governor Babajide Sanwo-Olu and all the emergency responders.

She said: “I moved a motion and the House resolved to call on the Nigerian National Petroleum Corporation (NNPC) to let us know why the issue of pipeline explosion is a recurring decimal and why every time we have a pipeline explosion, there has to be loss of lives and property.

“We were also able to resolve that the state government should fish out the culprits especially those that approved the erection of buildings around this pipeline area.”