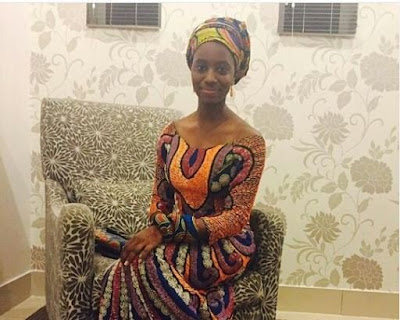 Khadija Yusra Sanusi, daughter of the former emir of Kano, has pleaded with her followers to stop sending condolences — in the wake of her father’s dethroning.

Muhammadu Sanusi II, a sitting emir of Kano, was deposed by Abdullahi Ganduje, the state governor, for “disrespecting lawful instructions.”

Taking to her Twitter page, Yusra called on her followers to stop sending condolence messages as regards the development.

The dethroned emir’s daughter also claimed that she has been the one consoling her friends. She teased that she might end up charging for the therapy sessions she’s offering. 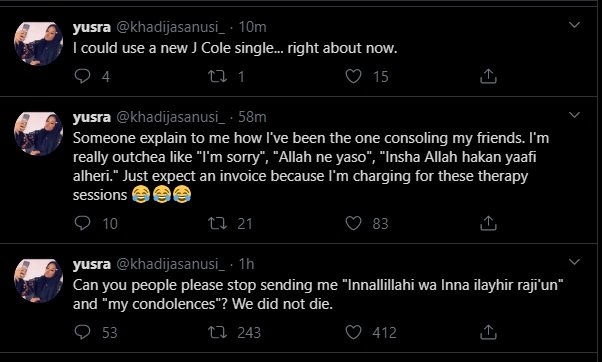 “Can you people please stop sending me ‘Innallillahi wa Inna ilayhir raji’un’ and ‘my condolences’? We did not die,” Yusra wrote in a flurry of tweets — which were deleted shortly after.

“Explain to me how I’ve been the one consoling my friends. I’m like ‘I’m sorry’. Allah ne yaso. Insha Allah hakan yaafi alheri. Just expect an invoice because I’m charging for these therapy sessions.”

‘Innallillahi wa Inna ilayhir raji’un’ is a Quran verse typically used when consoling a deceased person’s family. It roughly translates “from God we came, from God we shall return.”

Shortly before news of Sanusi’s dethroning broke out, Yusra had quoted her father as saying that he can be suspended as the emir but the truth can’t be concealed.

"You can suspend me, but you can't suspend the truth."

The man that raised me has never been afraid of letting go of power for the sake of integrity. https://t.co/bC6T5so6gg
— yusra (@khadijasanusi_) March 9, 2020

“‘You can suspend me, but you can’t suspend the truth.’ The man that raised me has never been afraid of letting go of power for the sake of integrity,” she wrote.

The dethroned monarch served as the governor of the Central Bank of Nigeria from 2009 to 2014, when he was suspended by ex-President Goodluck Jonathan under controversial circumstances.