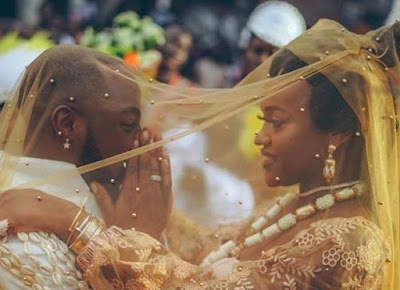 David Adeleke, Nigerian Afropop singer better known as Davido, has come through with the visuals for ‘1 Milli,’ a track off ‘A Good Time,‘ his last studio album.

The video was released on Tuesday.

The less than three-minute visuals sees the award-winning singer and Chioma, his girlfriend, stage what appears to be a mock version of their much-awaited wedding.

The colourful carnival music video started off on an ecstatic note with Chioma clad in a wedding gown and flanked by friends and well-wishers.

It also sees the ‘OBO’ crooner professing his love for his heartthrob, reiterating his commitment to do anything for her sake.

“What will I gain if I lose you to one of the boys online. I’ll pray and fight for you,” he sang in pidgin.

As the video progresses, the groom further noted his readiness to pay his lover’s bride price with a million dollars.

“How much is your pride price, tell your mummy, I’ll pay,” he added.

The lovebirds have continued to make headlines with their love story since the talented singer met Chioma while she was studying economics at Babcock University.

Davido had proposed to her last year.

This was followed by a low-key introduction ceremony with the singer announcing later that they would be getting married in 2020.

Watch the colourful video below: