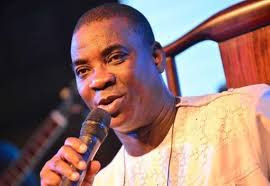 Fuji maestro, Wasiu Anifowoshe Ayinde Marshall (KWAM 1), the Mayegun of Yoruba land has steered reactions from social media users after a video of an incident involving him at an event surfaced online.

Also known as K1 De Ultimate, the 63-year-old musician was caught on camera slapping a photographer on the head during his performance at socialite Ibrahim Dende Egungbohun, a.k.a IBD Dende’s birthday party on Sunday in Lagos.

In the video currently trending on social media, the fuji musician slapped the photographer hard as he tried to take a photo of other guests at the party.

We are too violent! Our first instinct is not normal.
— FashfromEgba (@noafasina) March 10, 2020


Why beating him? This is assault and who is Wasiu to be beating him. This is not funny. Why is he crude? Can he try this in The US or the UK
— Dave Adeniji (@dave_adeniji) March 11, 2020

Thatketomumo wrote: “That was uncalled for, hitting someone just because he was trying to get a shot at what he was probably paid to be there for. These people should remember their last days o, never his fan”

ANkarafreak wrote: ” That’s rubbish how would u hit someone on his head like that because u are mayegun “