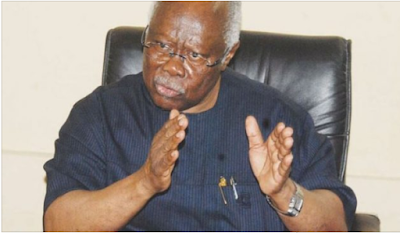 A chieftain of the Peoples Democratic Party (PDP) and former Deputy National Chairman of the party, Chief Olabode George has said he will contest for 2023 presidency if national leader of the All Progressive Congress, APC Bola Tinubu decides to contest.

The PDP chieftain said Tinubu should not be the president of Nigeria because he is not a good manager of resources and has no respect for the poor.

Speaking to DailyTrust, Pa George said “The moment I read that the APC will zone the Presidency to the South-West so that Bola can contest, I said to myself, I have put in far more and I would contest against him.

“Why? Because we all experienced what he did as a manager of this state. Whatever it takes, if he comes out, I’ll fight against him.


“To be assertive and to confirm, I am very much interested in the presidential race.

Asked if he had a personal disagreement with Tinubu, George said he just disapproves of the national leader’s methodology and has no personal issues.

“There is nothing personal. It is just about his methodology, his system of governance, the lack of respect for the poor people of this country.

“My major interest is not in being a candidate or becoming the president of Nigeria but finding a solution to various challenges plaguing the country,” George added.