THROWBACK VIDEO: Is This The Speech That Led To Emir Sanusi's Dethronement? 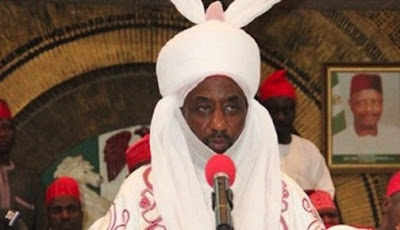 Many Nigerians were shocked as Lamido Sanusi, the 14th Emir of Kano was on Monday ripped off his crown and sent on exile by the government of Kano State, the biggest economy in Nigeria’s northern region.

Sanusi caused shockwaves in Nigeria when he alleged that the Nigerian National Petroleum Corporation (NNPC) had diverted $20bn (£12bn) in oil revenue in 2014. Intelligence officials seized his passports, and he was quickly kicked out as governor of the Central Bank of Nigeria.


The dethronement is argued by many to have been due to his frequent condemnation of corruption and misgovernance among Northern elites coupled with his controversial views on polygamy and family planning.

According to sources familiar with the issue, the aforementioned may have angered many in conservative northern Nigeria and thus led to Sanusi’s dethronement.


One of the many statements by the former Emir that could have led to his downfall is:

“If you look at all the poverty indices in the world today, you find that in south-west Nigeria the poverty is 20 percent and in the north-west, it is 80 percent, Northeast its same 80 percent. Why is it that the poorest parts in this country are the Muslim part?” Sanusi asked in a video that has since gone viral.

On the standard of education in the north, Sanusi said: “We have to be very honest with ourselves. How come the state that started Sharia is not the one that is the most educated state in Nigeria? In fact, how come in that state in 2017 only 24 students got five credits in secondary school?”

The minimum requirement for admission into Nigerian universities today is five credits, including English language and mathematics.

A copy of the five-paragraph letter that notified him of his dethronement said Sanusi was removed for acts of insubordination , including staying away from official functions in the state.

Signed by the Secretary to the Kano State Government, Usman Alhaji, the letter also informed the deposed Emir that the government had decided to banish him to Nasarawa state, a distance of over 600 kilometres from Kano.

He said his people cannot ask those questions until they understand that people have to live well in this world to serve Allah in the hereafter.

“For Islam to prosper, we need educated Muslims. We need Muslims that are not begging, and we need Muslims who are standing on their feet,” Sanusi said.

He warned that if poverty continued in the north, Islam would disappear from the region. Quoting Prophet Mohammed, he noted: Allah I seek refuge with you from disbelief and poverty. And poverty can lead to disbelief.

“These children that we see as Almajiri and we laugh at them and treat them as victims- somebody will just come and pick them up, put them in a school, give them medical care and convert them to another religion and they will do that by the hundreds, and thousands,” he said.

Sanusi noted that these street children in the north are products of bad economic policies and wrong priorities. “These children are not criminals, they are victims. What part of the Islamic law, what part of the Quran allows a father to give birth to a child and leave the child to go and fend for himself?” he asked.