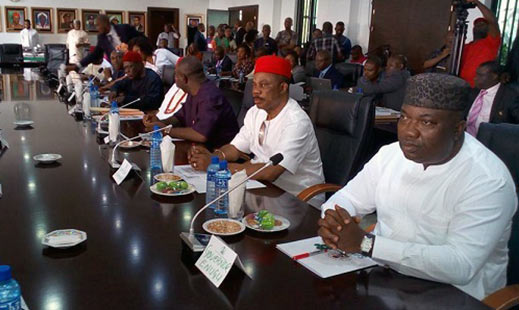 Southeast Governors’ Forum have reacted to the proposed Federal government loan of N22.7bn which has drawn some controversy since it was mooted last week.

The loan has drawn condemnation from the South easterners because no single projects in the loan is to be cited in the zone.


In a statement signed by the five governors of the region, the Forum noted that the loan have not been approved by the National Assembly.

They said: ‘South East Governors’ Forum met on Saturday 7th March, 2020, following a lot of calls and condemnations from our people questioning why South East should be excluded from the proposed Federal Government’s Loan of Twenty-Two Billion, Seven Hundred Thousand US Dollars ($22.7 Billion), whereas the other 5 zones of the country have visible budget”.

“Our people gave the impression that the Senate had already approved the sum despite objections raised by the South East Senators”..

The Governors noted that the House of Representatives has not considered the loan.

They said they have reached out to Mr. President, the Senate President and Mr. Speaker and gotten assured responses that they will address the issues within the context of the loan.

“We therefore plead with our people to be calm and engage us constructively as we believe that Mr. President has never said no to any of the requests of the South East Governors”.

“The South East Governors believe that we can deploy dialogue, negotiation and good understanding to right any perceived injustice, rather than engage the Federal Government in a battle of which no body is expected to win the boss”

“We have written to Mr. President and the leadership of the National Assembly on this matter and we believe that the inclusion of the South East Rail line corridors, development of our Coal Plant in Enugu and development of limestone deposits in the South East should make the list with the loan”

‘We must however continue to thank our dear President for his unstoppable kind attention on the construction of the 2nd Niger Bridge, renovation/expansion of Akanu Ibiam International Airport, Reconstruction of Portharcourt/Enugu two-lane expressway, and other projects in the South East by the Federal Government’.

‘We pledge our loyalty and support to Mr. President in the face of this challenging moment of our National history as we keep faith in God Almighty”, the said.