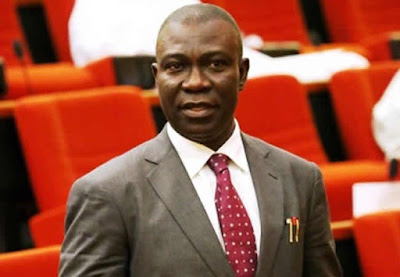 The senators from the south-east have alleged that the region was excluded in the spending plan of President Muhammadu Buhari’s proposed $22.7 billion loan.

The federal lawmakers have, therefore, met with the leadership of the national assembly to seek adjustments in the plan as presented by the president.

Ike Ekweremadu, former deputy senate president, who was flanked by members of the caucus, said this while addressing journalists in Abuja on Thursday.

Buhari had sought the lawmakers’ approval for the loan request which he said will be used to finance key infrastructure across the country as contained in the spending plan.


While the senate has approved the request, the house of representatives is yet to consider it.

However, the south-east senators said the region must be accommodated in the plan if it will be part of those to repay it.

Ekweremadu said the lawmakers are hoping that relevant adjustments will be made in the proposal before implementation.

“We are believing that the matter would either be revisited or since it has not been passed by the house the right thing would be done and then our peoples fears would be assuaged,” he said.

“We believe that equity and justice should be the way forward for our country to make progress as their thinking is for an equitable distribution.

“Our thinking is that what the federal government is presenting was a borrowing plan; being a borrowing plan there is still opportunity for us to look at the distribution so that every part of Nigeria would have a sense of belonging on how the loan would be managed.

Ekweremadu said the senators hope that when the matter is addressed, “the fears of our people will be addressed”.