SHOCKER: 793 people die of coronavirus in Italy within 24 hours 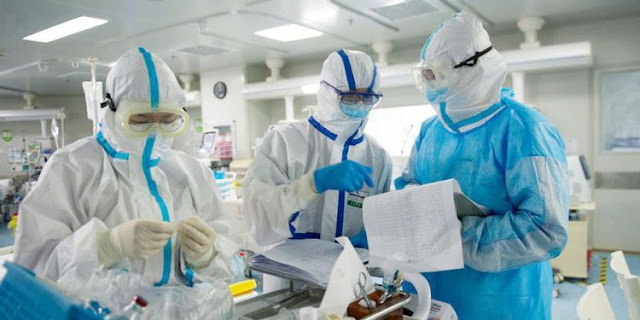 Seven hundred and ninety three people died of the coronavirus in Italy on Saturday, taking the country’s total deaths from the pandemic to 4,825.

The figure represents the highest day-to-day rise in the number of deaths.

But China, where the pandemic started, did not record any fresh case for the third day in a row.

Despite extensive measures to prevent the disease from spreading, Italy remains the worst affected country in Europe.

Italy’s fatalities are said to account for 38.3 per cent of the world’s total.

Video from inside the city’s main hospital showed patients lined up in a narrow ward, struggling for breath as doctors and nurses moved from one beeping machine to the next.

It has been on lockdown since March 12, when public gatherings were banned and most stores shuttered.

Police stormed the streets of Rome yesterday, checking documents and fining those outside without a valid reason, such as buying groceries.

In Bergamo, in the northern Italian region at the epicentre of the outbreak, cemeteries are now overwhelmed too.

In one town, authorities are trying a new tactic.

The residents of Vo, near Padua – perhaps the first Coronavirus ‘hotspot’ in Italy – have been tested and isolated and then retesting and retesting every one of the 3,300 inhabitants.

Authorities have found the number of infections has stopped rising.

Spain has issued lockdown orders for some 46 million people who are only permitted to leave their homes for essential work, food shopping, medical reasons or to walk the dog.

The lockdown notwithstanding, more than 31,000 people have been fined for flouting the lockdown rules announced by Spanish PM Pedro Sanchez penultimate Saturday.

Another 350 have been arrested nationwide according to Interior Minister Fernando Grande-Marlaska.

A South American man was arrested by police in Malaga on Thursday near the city’s Maria Zambrano train station after going up to strangers in the street and hugging them without their consent.

On Tuesday a 40-year-old woman was arrested near the northern Spanish city of Zaragoza for spitting at police officers called to her house following a disturbance. A coronavirus test on her came back positive on Thursday.

No new cases in China for third day in a row

China reported no new domestic cases of the coronavirus for a third consecutive day yesterday.

However, it confirmed the highest yet increase in infections imported from abroad.

The rate of infection in China has fallen for weeks while the rest of the world steps up measures to try and battle the pandemic.

All 41 of new confirmed cases in China were imported from overseas, the country’s National Health Commission said, bringing the total number of such cases to 269. There were no locally transmitted cases, for the third consecutive day.

Life in Wuhan, the centre of the coronavirus outbreak, is beginning to return to normal.

Some 56 million people in Wuhan and surrounding Hubei province underwent the lockdown in late January, but authorities there are reportedly progressively easing the travel restrictions as cases have dwindled.

“Wuhan provides hope for the rest of the world that even the most severe situation can be turned around,” WHO chief Tedros Adhanom Ghebreyesus said in Geneva on Friday.

“Of course, we must exercise caution; the situation can reverse. But the experience of cities and countries that have pushed back this coronavirus gives hope and courage to the rest of the world.”

China announced on Thursday that for the first time since the coronavirus outbreak started, it had no local transmissions of Covid-19, a major milestone in the country’s fight against the pandemic.

But China is now having to step up controls to tackle infections brought in from other countries, with another 41 cases reported Saturday – the highest one-day tally yet.

Beijing and Shanghai were the main entry points for the returnees, many of whom are students studying abroad, according to official reports. They have come back after many campuses in the United States and Europe shut down to stem rapidly rising infection rates there.