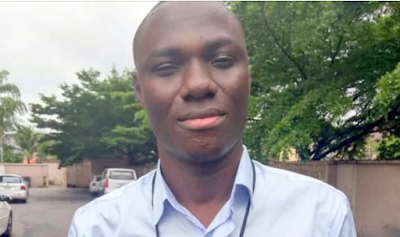 Premium Times, the investigative online newspaper, says it is suspecting that security operatives are trailing its reporters.

In a report on Sunday, the newspaper said there are indications that some of its reporters are being targeted over a report on the “rift” between Babagana Monguno, national security adviser (NSA), and Abba Kyari, chief of staff to President Muhammadu Buhari.

Citing some documents, the newspaper had reported that Monguno accused Kyari of “undue and dangerous interference on matters bordering on national security”.

The NSA was said to have issued a warning memo to all service chiefs to desist from taking further directives from Kyari.

It said days after the story was published, the internet identity and domain of Samuel Ogundipe (pictured), the journalist who filed the story, were “subjected to a relentless hacking attacks while he has been receiving calls from strange numbers to confirm his identity”.

The newspaper said early on Sunday, two men suspected to be officials of the Department of State Services (DSS), attempted to breach the home of Musikilu Mojeed, its editor-in-chief, claiming they had a message to drop for him.

“The two men, both dark in complexion, one tall and clad in a dark suit, the other of average height wore a t-shirt, rode in a 2008 Toyota Camry car, Haulat Mojeed, wife of the editor said,” the report read.

“The plain-clothed men, Mrs Mojeed recalled, asked that she open her gate as they have a parcel for her husband whom, they told her, they were aware was not around.

The editor’s wife was said to have told them she wanted to fetch her phone, call her husband, and ask if he was expecting any parcel, but they reportedly left before she did so.

The report said after the encounter at Mojeed’s house, another set of paired security operatives arrived at Ogundipe’s residence.

They were said to have parked at the roadside, looking directly into his apartment through the fence, and “after apparently noticing no activity, they drove off”.

Reacting to the development, Premium Times management said: “In an age of widespread kidnapping it adds no value to the image of security officials to play by the protocols of nefarious actors in the community, visiting the homes of citizens and making up stories about dropping messages for them or threatening them through anonymous calls.

“If the security forces want any of our staff, we would be happy to present them in a way that will ensure clear accountability.”

The newspaper said it has asked its lawyers “to take up the matter from here.”

But in a statement, Peter Afunanya, DSS spokesman, said there is no operation targeted at Premium Times.

Afunanya said if there is any need for the service to discharge its duties, it would do so in accordance with the laid down procedures.

“The report that the DSS is laying siege on Premium Times and has hacked the phones of one of its staff is false in its entirety. It is unfounded and just a needless sensationalism,” he said.

“There is no such operation at the moment by the Service targeted at the Premium Times, its editor or staff. If there is any need for the DSS to discharge its duty, it sure have to do that with every sense of decency and in accordance with laid down procedures.

“Now the service is not anywhere near the news agency. Therefore, the report should be disregarded.”