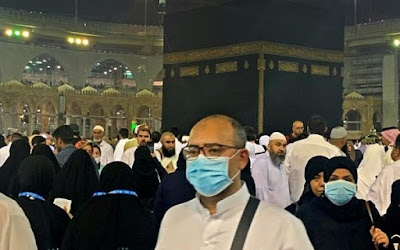 According to SPA, the suspension is part of the protective measures the government has taken to reduce the spread of the infection.

The measure is coming after Riyadh banned people from travelling to Saudi Arabia to complete the Umrah pilgrimage to Makkah or to visit the Prophet’s Mosque in Medina.

Millions travel to Saudi Arabia every year to perform Umrah, a smaller pilgrimage than the Hajj, and it could be undertaken at any time during the year.


However, the 2020 bigger Hajj was expected to commence in July.

A total of 94 countries and territories were imposing entry restrictions or stricter quarantine procedures on people from South Korea over coronavirus concerns, Seoul’s foreign ministry said on yesterday.

As of 2 p.m., 33 countries and territories imposed an outright entry ban for travellers who have visited Korea in the past two weeks, according to the ministry website.

Qatar began to enforce an entry ban starting Monday on foreigners with a record of visits to South Korea, China, Iran, Italy or Egypt over the past month.

Foreigners who have residential permits in the Middle Eastern country will face a 14-day quarantine at a designated facility.

Five other countries, the Maldives, Vietnam, Japan, Fiji and the Philippines were barring the entry of those with a record of visits to South Korea’s Daegu city and nearby North Gyeongsang Province, the main clusters of COVID-19 infections.

Including 15 provinces in China, 22 countries and regions were imposing a mandatory 14-day quarantine for travellers from Korea. The Chinese island province of Hainan was added to the list.

Italy prepared new emergency measures yesterday to try to slow the spread of coronavirus in Europe’s worst hit country, including the possible closure of all schools, universities, cinemas, theaters and most public events.

Seventy-nine people had died of the new coronavirus in Italy as of Tuesday, with more than 2,500 confirmed cases since the outbreak surfaced 13 days ago.

Costa Rica now requires all passengers from Korea, China, Italy and Iran to undergo separate health screenings inside the airport.

Denmark recommends a two-week home quarantine for those who came from Daegu and North Gyeongsang Province, as well as a few other virus-affected locations.

Venezuela has been moved to the list of those requiring foreigners from Korea, China, Japan, and Singapore to be quarantined at a facility if they are suspected of infection.

The South American nation had been carrying out temperature checks upon arrival and monitoring thereafter.

That puts the number of countries with less strict quarantine procedures or quarantine recommendations at 34, including Nepal, which has announced a halt to issuing arrival visas for foreigners from virus affected countries starting next Tuesday.

The U.S. is yet to implement entry restrictions.

But U.S. President, Donald Trump said Tuesday (U.S. time) that Washington is looking closely at South Korea over the coronavirus outbreak and will decide whether to impose travel restrictions on its Asian ally at the right time.

All South Korean passengers on flights bound for the U.S. currently undergo temperature checks before boarding.