9:14 AM CuteNaija 0 Latest News in Nigeria 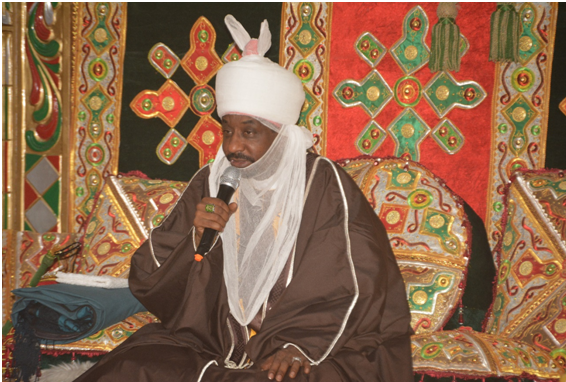 The immediate past Emir of Kano, Alhaji Muhammadu Sanusi II’s lawyers on Tuesday vowed to challenge his banishment and detention by the Kano State Government.

Sanusi’s legal team led by a former President of the Nigerian Bar Association, Abubakar Balarabe-Mahmoud, at a press conference in Kano, said government should release Sanusi or face a legal action. They also raised the alarm over the deposed Emir’s personal safety and security.


The lawyers stated that they had not been able to speak to Sanusi since Monday, adding that the location of the place where the deposed Emir was being detained was meant to cause him “maximum trauma and distress.”

Sanusi, who became the 14th Emir of Kano on June 8, 2014, was dethroned on Monday by the Kano State Governor, Abdullahi Ganduje, and banished to Nasarawa State.

The Secretary to the state Government, Alhaji Usman Alhaji, who announced Sanusi’s deposition and the appointment of Alhaji Aminu Bayero as his successor, said the immediate past Emir was removed because of “total disrespect to lawful instructions from the office of the state governor.”

At 5:36pm on Monday, the Emir was forced out of the palace from where he was taken to Loko in the Nasarawa Local Government Area of Nasarawa State.

Criticising the treatment being meted out to Sanusi, the lawyers, at the press conference, said, “We have not spoken to the Emir since yesterday (Monday), but we understand that they are at their destination somewhere in a remote part of Nassarawa State after driving for nearly seven hours in the night and arriving about 2am today.

“We understand that the choice of the location to detain Muhammadu Sanusi II was intended to cause maximum trauma and distress. This again is illegal and unconstitutional.

“According to instructions we received from the Emir through his chief of staff, we are directed to take legal action to challenge the legality of the Emir’s detention and banishment.

“We are of the firm view that this action is illegal and unconstitutional. Section 35 of our constitution guarantees every citizen the right to personal liberty. The bases of the denial of personal liberty are set out clearly in this Section of the Constitution. None applies to the case of the Emir.”

The lawyers said the archaic practice of banishment of deposed Emirs, a colonial practice, had no basis in the country’s constitution.

They said, “The illegality of such a practice was pronounced by the Nigerian Court of Appeal in Attorney General Kebbi State v. the former emir of Gwandu, Alhaji Al-Mustapha Jakolo, and ors 2013 LPELR 22349/CA where the court pronounced it as illegal and unconstitutional gross violation of the rights of the Emir.

“We call on the authorities, in particular the Inspector-General, the Director General of Department of State Services and the Attorney-General of the Federation and Minister of Justice to ensure the immediate release of Sanusi II so that he can be reunited with his family.

“We are concerned about his personal safety and security, and wish to call on all well-meaning Nigerians and the international community to bring their influence to bear to ensure that he regains his liberty immediately and to guarantee his safety and security.

“We, the legal team of the dethroned Emir, are working both in Kano and Abuja and unless he is released immediately, we will be taking appropriate legal action.”

According to them, the Kano State Emirate Council Law, which was recently enacted by the Government of Kano State, does not give the state executive council or the Governor of Kano State the powers to unilaterally remove the emir.

They said, “The reason given in the letter of deposition of the Emir dated 9th March, 2020, was alleged ‘disrespect to lawful instructions from the authorities’.

“The Emir was also alleged to have ‘refused to attend official programmes and meetings organized by the Government’, As far as we are aware, there has not been any notice of such disrespect ever given to the Emir or querry issued to him for refusal to attend official functions.

“He was never given any opportunity to defend himself against those charges. Section 13 of the Kano Emirates Council Law 2019 cited in the letter of deposition empowers the Governor to depose an Emir only after due inquiry and in consultation with State Council of Chiefs.

“We are not aware of such due inquiry nor are we aware that the Kano State Council of Chiefs was at any time summoned to any meeting much less discuss the removal of the Emir or give any advice to the Governor on the deposition.”

“Be that as it may, the decision to challenge the removal is solely that of Emir Muhammadu Sanusi II. At this moment no such instruction has been given to us.”

The head of the legal team also explained how Sanusi and his family were harassed after the deposition of the Emir.

He said while Sanusi was waiting for his deposition letter there was commotion in the private wing of the palace as some unauthorized persons tried to gain entry into the family section.

The SAN said, ‘’This led to some scuffle and tear-gas canisters were fired by the security operatives. Normalcy was restored after the unauthorized persons along with armed security operatives retreated from the inner part of the palace.”

He said the Emir later received the letter which indicated that he was to be moved to Nasarawa State.

“The Emir informed the Commissioner of Police that his friends had sent an aircraft to fly him and his family to Lagos and requested that they should be provided with necessary security to the airport so that he could leave.

‘’The commissioner refused saying that was not their instruction. They were willing to allow the family to leave for Lagos but he was to be flown to Abuja then onwards taken to Nasarawa State.”

He said when it was clear that the police were bent on using force to achieve their objective, the Emir cooperated with them in order not to jeopardize his safety, that of his family and persons around.

Balarabe-Mahmoud said the Emir was taken in a private aircraft at 6:40pm, while the family subsequently boarded the aircraft arranged by his friends and departed for Lagos about 15 minutes later.

There were indications on Tuesday that more troubles awaited Sanusi II, as Kano State Public Complaints and Anti-corruption Commission said it would not drop investigations into the N2.2bn land scam against him.

The Chairman of the commission, Muhuyi Magaji Rimingado, in an interview with one of our correspondents on Tuesday, said the investigation into the N2.2bn land scam allegation against the dethroned Emir was going on.

The anti-graft agency had a few weeks ago begun a probe of the deposed Emir over illegal sale of landed property.

Before his removal, the anti-corruption commission had issued an invitation letter to him to appear before it on March 9, to clear himself of the allegations.

But on March 6, a Federal high Court sitting in Kano granted an interim injunction restraining the Kano State anti-commission agency from further investigating the Emir of Kano, Muhammadu Sanusi II.

The chairman of the commission, Mr Muhuyi Magaji Rimingado, in the interview with newsmen said the investigation had not stopped.

He stated, “Even yesterday (Monday) some companies were invited by the commission, but on the emir, the investigation will continue after the court order (has been vacated).”

He said with the deposition of embattled monarch, the commission would have what he described as ‘fertile ground’ to carry out its investigation without any interference.

Rimingado said, “It is now that we have the fertile ground for our investigation since the emir is not around.”

He also defended Sanusi’s removal, saying he was deposed because he was fond of criticising the government of Ganduje in public. He said no one in power could condone such public criticisms.

He said Sanusi, who had easy access to Ganduje, should have private discussions with the governor on state issues instead of criticising the governor publicly.

The governor’s spokesman said, “The emir had access to the governor and could have advised him if he wanted to but unfortunately, he only finds podiums and stages as the only means to advise the government, which is not right.

“So, you can portray it has political or whatever but the fact remains that no one would allow such disrespect and open criticism when you have access to him.”

Sanusi, in his farewell to Kano people in his palace on Monday urged them to remain peaceful. He thanked them for their support during his reign as the 14th Emir of Kano.

In a video released in the early morning hours of Tuesday, the dethroned Emir of Kano said he accepted the dethronement as a will of God. He prayed that God bless “us with good leaders.”

He stated, “We wish to call on the public to remain peaceful, whosoever is made the Emir, we hereby instruct our family members, children and all those we have authority on to declare their allegiance to him.

“We have always said it that being an Emir is limited by time. The days Allah has willed for one to remain as Emir are limited. Once those days are completed one must vacate the throne whether he wants to or not. As a result of that we accept whatever Allah wills. We accept, we are thankful, we are happy and we believe it is the best for us.

“May Allah bless you all, keep you alive and enrich our dear land. May He bless us with good leaders. May Allah bless this Emirate and our country at large. May He return our land to us.”

Sanusi moved to another Nasarawa town

It was gathered that Sanusi was moved to Awe because of lack of amenities in Loko, a town that shares boundary with the Federal Capital Territory.

The traditional ruler of Loko, Abubakar Sabo, told the News Agency of Nigeria on Tuesday, that Sanusi had been relocated from his domain.

He said, “The emir of Kano left my domain around 1:40pm. I don’t know where they have taken him to. They came with a helicopter and took him away. He has left.”