Russia President, Putin signs law ‘allowing him to remain in power until 2036’ 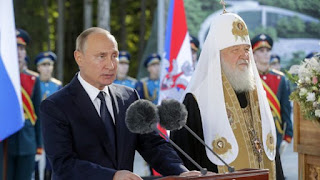 Vladimir Putin, president of Russia, has signed a law that potentially allows him to remain in power until 2036 — having been ruling the country since the year 2000.

The amendment, which was signed on Saturday, comprises a stipulation that enables Putin to seek re-election as against the current law which would disallow his running for president in 2024.

Putin had earlier proposed a constitutional amendment seeking to redefine marital concepts in a manner that place a ban on gay marriage — ahead of a referendum on April 22.

According to DW, the amendment contains nearly 400 changes among which is one that would restart the counting of Putin’s presidential terms, positioning him for two more six-year terms.

The 67-year-old politician had served two four-year terms as president from 2000 to 2008 before the presidential term was later extended to six years, seeing him get re-elected in 2012 and 2018.

Putin had introduced the amendment in a “last-minute proposal” to the 68-page bill on Tuesday, after which it was approved in the lower and upper house and also passed in regional parliaments.

It is believed that other changes potentially strengthen the presidency and emphasizes the priority of Russian law over international norms.

“These amendments are long overdue, they are needed, and I am sure they will be useful for society, for our citizens… because we have had enough of revolutions,” Putin reportedly said.