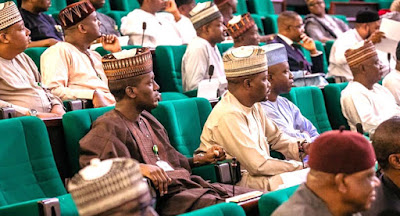 The House of Representatives at the plenary on Thursday condemned the rising cases of extrajudicial killing, extortion, harassment, and intimidation by men of the Nigeria Police Force.

The House called for the review of the Special Anti-Robbery Squad and other tactical squads created by the NPF to reduce human rights abuses.

The call followed the unanimous adoption of a motion moved by Adewunmi Onanuga, titled, ‘Need to Re-Assess and Re-Evaluate the Tactical Squads of the Nigeria Police Force’.

Consequently, the House mandated the Committees on Police Affairs, Justice and Human Rights to investigate the recent action by SARS operatives that led to the death of a Remo Stars Football Club player, Tiamiyu Kazeem, in the Sagamu area of Ogun State and ensure that “justice is not only done but seen to be done.”


The House further called for “adequate compensation” of Kazeem’s family over his death, while observing a minute silence in honour of the deceased.

Also, the parliament urged the NPF to regularly orientate its officers and all tactical squads about their obligations and the rights of citizens as contained in the 1999 Constitution and the Universal Declaration of Human Rights.

Furthermore, the lawmakers urged the Federal Government, through the National Human Rights Commission and alongside the House Committee on Police Affairs, to “pay unannounced regular oversight visits to all detention facilities to affirm that no human rights are being violated.”

In addition, the House urged the Inspector General of Police, Mohammed  Adamu, to “re-examine the objectives behind the establishment of the tactical squads, return them to their original concept, streamline their scope of operations and restrict their interference with civil and financial crimes.”

The House further urged the police to establish a Special Bureau Unit that monitors officers of the force, including tactical squads, arrests, and charges erring officers for unprofessionalism.

The lawmakers also urged the Federal Government to look into the recommendations by the Tony Ojukwu-led panel and in particular the recommendations to “strengthen the Information and Communication Technology of the NPF, establish state and local government area police, and to institutionalise a special investigation panel to annually hear and determine complaints of alleged human rights violations against the police.

Moving the motion, Onanuga said, “The House notes that the brutality, overbearing intimidation, recklessness and lack of professionalism on the part of the tactical squads, particularly the Special Anti-Robbery Squad, otherwise known as SARS, and the Zonal Intervention Squad of the Nigeria Police Force, have once again been shown with the recent death of a young, vibrant and promising footballer, Tiamiyu Kazeem of the Remo Stars Football Club, who met his untimely death on Orile Imo-Siun road, in the hands of some SARS operatives.

“The House recalls that not too long ago, the #ENDSARS campaign was the anthem on the streets of many states of the Federation and different platforms on the social media, which led to the President (Major General Muhammadu  Buhari, (retd)) setting up a panel headed by the Executive Secretary, National Human Rights Commission, Mr Anthony Ojukwu, to investigate and submit reports on the allegations of misconduct against SARS.”

Onanuga also recalled that the panel came up with recommendations to the President, which included, among others, the dismissal of 37 officers, prosecution of  24 officers, some compensations to be paid, the renaming of SARS and the creation of state and LGA police in the country. She said in reaction to the recommendations by the panel, the IG had released a statement saying that SARS had been reformed and itemised six new terms and conditions of the operations of SARS.

The lawmaker said, “The House is worried that the recent death of this young and vibrant man, Tiamiyu Kazeem, has shown, however, that even the Nigeria Police Force cannot bring its officers to abide by the rules of engagement, as their action was in clear contrast with the terms and conditions of the alleged ‘Reform SARS.’

“The House is also worried that prolonged negligence of the issue may result in a crisis between the police and the citizens as evident after the death of Kazeem; when the protector becomes the harm, the protected will look for ways to defend and shield himself from any harm.”