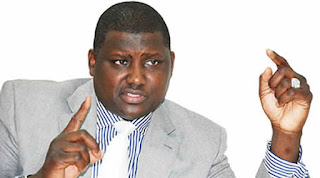 The lawyer for the Economic and Financial Crimes Commission, Mohammed Abubakar on Wednesday, claimed Abdulrasheed Maina was plotting to kill him, prosecuting witnesses and prison officials and escape from prison.

Maina, chairman of the now-defunct Pension Reform Task Team, who is being prosecuted for money laundering involving diversion of pension funds, has been remanded in custody since his arraignment in October last year.

He has remained in prison, having not been able to meet the conditions of the bail granted him in November 2019.

This is despite Justice Okon Abang’s decision to vary part of the bail conditions in a subsequent ruling delivered on January 28.

The defendant has again applied to the court to further vary the bail conditions on the grounds that he had been unable to get a surety senator as demanded by the judge.

But Abubakar filed an application seeking the revocation of the bail granted the defendant by the court.

He claimed “the 1st defendant/respondent who was granted bail by the court since November 26, 2019 (though still in custody) has perfected plans to assassinate prosecution witnesses and counsel in this matter.”

He added that Maina “perfected plans to escape from custody and abscond; and in the process assassinate Nigerian Correctional Service officials attached to him.”

Responding to Maina’s request for further variation of the bail conditions, Abubakar said there was a “need to protect the witnesses, counsel and officers by keeping the 1st defendant/respondent in custody during the pendency of this criminal matter as well as provide additional/ maximum security around him while in custody pending conclusion of trial.”m

He recalled Maina was arrested preparatory to his arraignment and that his son, Faisal, who was with him, was found to be in illegal possession of a firearm.

But counsel for Maina, Joe-Kyari Gadzama (SAN), urged the court to adjourn the case to enable him to respond to the prosecution’s application.

He urged the court to hear the two applications – the one by the prosecution asking for the revocation of the bail granted Maina, and the other by the defendant seeking further variation of the conditions attached to the bail.

Although, Abubakar requested that his application be heard on Wednesday, the judge acceded to Gadzama’s request for the hearing of the two applications simultaneously.

The judge adjourned till March 16.