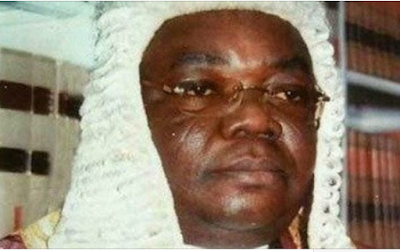 One judge stood out during the ruling on the application filed by Emeka Ihedioha, a former governor of Imo state. Ihedioha had asked the apex court to review its judgement on his removal from office but while majority of the seven-man panel disagreed with him, Chima Nweze, found merit in the application.

In his dissenting judgment, Nweze asked the court to set aside the January 14 judgment that removed Ihedioha from office, describing it as a nullity and in bad faith.

He also nullified the declaration of Hope Uzodinma of the All Progressives Congress (APC) as governor on account of “wrong declaration” and held that Uzodinma misled the court into unjust conclusion with the unverified votes in 388 polling units.

“This decision of the Supreme Court will continue to hunt our electoral jurisprudence for a long time to come,” he said.

“In my intimate reading of the January 14 judgment, the substance of Ihedioha’s matter was lost to time frame. This court once set aside its own earlier judgment and therefore cannot use time frame to extinguish the right of any person.

“This court has powers to over rule itself and can revisit any decision not in accordance with justice. This court has a duty of redeeming its image. I am of the view that this application should succeed. I hereby make an order setting aside the decision of this court made on January 14 and that the certificate of return issued to the appellant be returned to INEC. I also make an order restoring the respondents as winner of the March 9 governorship election.”

Nwexe’s position came as a surprise to those who expected the ruling to be unanimous – as it is in most cases. Of the seven judges on the panel, he was the only one who was not on seat when the court sacked Ihedioha.

At that time the verdict was unanimous.

‘ATIKU’S APPEAL IS WITHOUT MERIT’

Nweze was part of the supreme court panel that refused the request of Atiku Abubakar, PDP presidential candidate, to inspect servers of the Independent National Electoral Commission (INEC).

At the time, Atiku was challenging the declaration of President Muhammadu Buhari as winner of the 2019 presidential election.

“I see no reason for departing from the reasoning of the lower court. I find that this appeal is without merit, and it is accordingly dismissed,” Nweze had held in the ruling that was unanimous.

In 2014, former President Goodluck Jonathan approved the recommendation of the National Judicial Council (NJC) to appoint Nweze to the supreme court. Thereafter, he went through a screening at the senate and was confirmed as a judge of the apex court.

Nweze was legal adviser to Okwesilieze Nwodo, a former governor of Enugu state. The jurist, who was born on September 25, 1958, bagged all his degrees – from bachelors to Ph.D – from the University of Nigeria Nsukka (UNN).

He attended St John Cross Seminary, Nsukka between 1972 and 1977. Nweze was called to the bar in 1984 and completed his National Youth Service Corps (NYSC) programme in Bauchi in 1985.