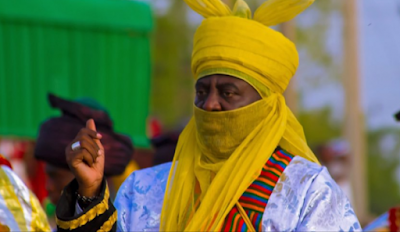 The Kano executive council chaired by Abdullahi Ganduje, the governor, removed Sanusi as emir of Kano ” for disrespecting the office of the governor”. As the monarch was removed, attention shifted to Ado Bayero, who was announced as his successor hours later. Prior to his appointment, Ado Bayero was the emir of Bichi, one of the four emirates created by Ganduje after the governor fell out with Sanusi.

The new emir of Kano has held different traditional titles in the last three decades. In 1990, he was appointed Danmajen Kano; later he became Danburan Kano, then Turakin Kano to Sarkin Dawakin Tsakar Gida and finally, Wamban Kano.

Speaking after he was appointed emir of Bichi, Ado Bayero, a graduate of mass communication from Bayero University, Kano, said he believes power belongs to God who gives it to whom He wills. He said he has never begged for titles and never will.

“Let me say that it is God that gives power and position and in His infinite and supremacy, He bestows such power and position to whom He so desires. Now, let me tell you this secret. Right from day one when I was appointed a traditional ruler till this period of my appointment as Emir of Bichi, I have never, and let me repeat, I have never gone to any person to look or seek for position and you can do your investigation. I have never gone to anybody to say, ‘please give me this title’. I don’t ask for positions; I believe anything that comes my way is from God,” he had said.

HE DIDN’T WANT KANO EMIRATE TO SPLIT
Bayero said he never wanted the split of the Kano emirate which saw him become the emir of Bichi. He added he, however, accepted that things changed over time.

“A lot has happened over times and years. We have had creations, re-creations and several reformation and this is not peculiar to Kano and even Nigeria as a country. I can say that it is this process of evolution that brought about the formation of the four new emirate councils by the government,” he had said.

“As a proud member of the royal family, it was never my intention to see the Kano emirate council divided into sub-emirates. It was never my wish. But we have to take so many things into consideration especially the fact that time changes a lot of thing.”

BORE NO GRUDGE AGAINST SANUSI

On his appointment as emir of Bichi, Bayero, who described Sanusi as his brother, whom he said he bore no grudges against. Sanusi was selected to succeed Abdullahi Ado Bayero, the new emir’s father, on June 8, 2014. Many of those expected one of the sons of the late monarch to succeed his father, opposed Sanusi’s appointment.

Also, in 2015, Sanusi removed Sanusi Ado Bayero, eldest son of his predecessor, as Ciroman of Kano, handing over to his younger brother, Nasiru Ado Bayero. Despite these incidents, the new emir said he was not pitched against Sanusi.

“I don’t need to tell the whole world before you know that the Emir of Kano, Alhaji Muhammad Sansui is my brother and our relationship remain intact as mutual as ever. Today, there is change and government effected creation of additional emirates. I accepted the traditional title in good faith as God’s will,” he said.

“What I want the people of Kano to understand is that I am still a son and royal member of Kano emirate and I want people to consider the new emirates as new developments that will lead to the growth of Kano.

“As far as I know, we don’t have anything between us. Let me also say this clearly; when Muhammad Sanusi II became the Emir of Kano, I was among the first traditional title holders who supported him with my whole heart. I paid my loyalty, my homage and every other respect you can talk about. Now, change has come into the emirate council. I hope and wish I will also receive same support from Kano emirate.

“As I said, God alone bestows power and alone He takes the power. Now, if along the line there is a change from what I am today to what I was, I will still thank Almighty God for that because I believe that, that is what God wanted to happen.”

For what he thought may never have been, Ado Bayero now goes down history as the 15th emir of Kano, the highest traditional title in the land. And except he is dethroned or he abdicates the throne, he will occupy that position until his death, and may probably outdo the years of his father.

He did his one-year National Youths Corps Service programme at NTA Makurdi, Benue state. Born in 1963 in Kano, he attended Gidan Makama Primary School located near the Gidan Makama National Museum in Kano metropolis, after which he went to Gwale Secondary school.